Well, I've been a little absent from the blog for a while. In all honesty it's because I've been feeling a little bit sad. How feeble of me! But I guess if I'm going to really document this process then I need to include the not so happy moments, so I need to get writing!
Everything has been moving on at such a pace, and of course the weather has been glorious to help chivvy us along too, but with a turn in the weather came a spot of news that seemed take away all my momentum. In a very simplified nutshell our planning permission is hinged upon ecology reports and bat surveys at the moment. In fact, we are still waiting for the ecologists (who we have to pay an awe inspiring amount of money) to send over their report to our architect so that planning can even be submitted.

In all honesty I think I'm still too close to it all and feeling pretty raw about everything that's going on to write a sensible blog post covering all the issues we've faced, and are still facing in any sort of detail. So maybe in a few months time I'll write up a proper post going over all the problems that have cropped up and how I feel about it all without coming across as too angry or bitter.
Needless to say at the moment Ecologists and county council planning officials are currently off my Christmas card list.

As I mentioned the weather has turned and we've had a couple of nasty showers and rain storms passing over, so I'm relieved I got all the exterior painting on the house done in that sunny spell otherwise it would be looking even more drab than when we started.
Dad too is feeling a little dejected, as the rain is holding up all his digging work, you can't really get stuck into landscaping if the landscape is muddy gloop.
We did manage to finish off the entrance way to the drive, so the sign is now sitting in some little green tufts of grass, there's a spot to pull in if a car needs to pass by (or for me to park when it's snowing and I can't drive up the hill) and Dad and I (mainly Dad) started on building a little fence to lead the way down the lane and onto the drive way.
We've gone for quite a low wooden fence, so it's low impact visually but also pleasing when you're eye does rest on it - now then, didn't that sound fancy? 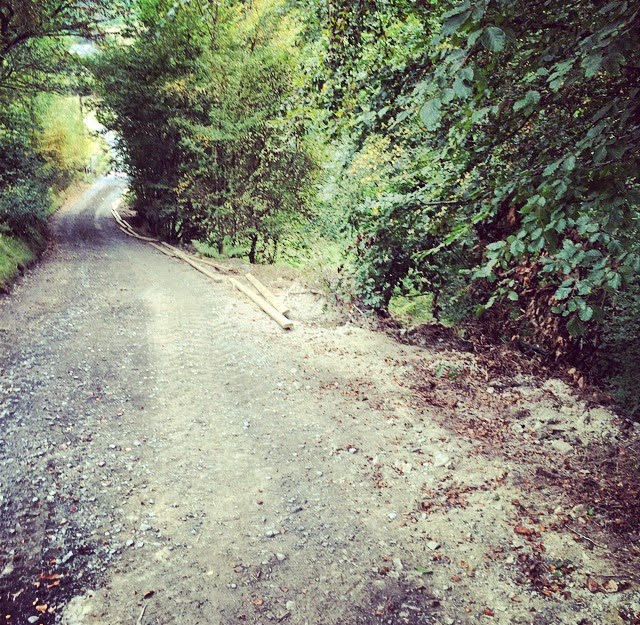 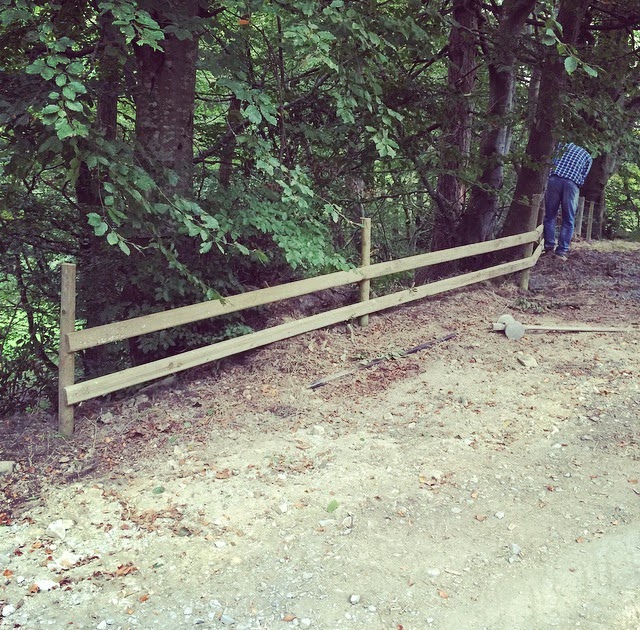 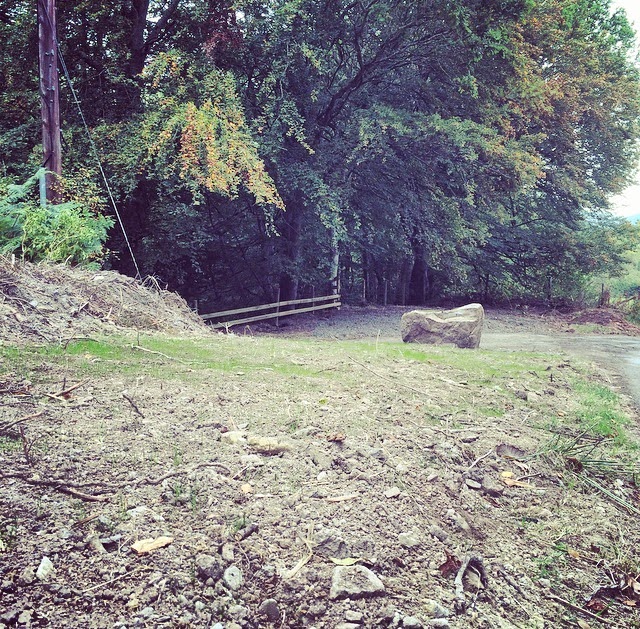 You'd think that with fences popping up all other the shop that the sheep would take the hint and stay where they were supposed to but apparently we seem to have acquired the most disobedient lambs that ever walked this green earth. They will escape from anywhere, only the other afternoon JC and I foiled an attempted escape as we were driving home, just at the top of the drive a suspicious looking gang of four were pressed up against the fence looking over to the other side. 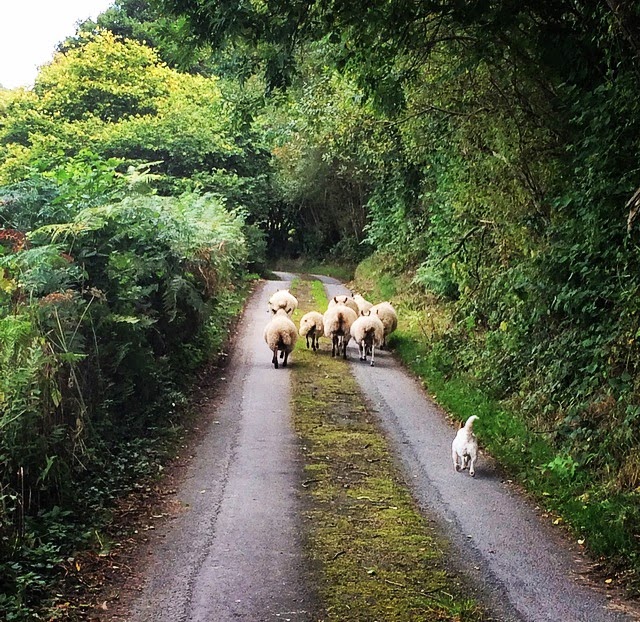 When we can Dad is continuing with the digging mission, ideally we need to clear the back of the house so that we can put a fresh drain in to get rid of the water that runs down from the fields above. Once we've sorted the back we can move on to the front of the house. Already it looks significantly different to two months ago which is encouraging despite there being a long way to go before it's finished enough to move on.
The following is two photos from roughly two months ago, and then two more from two weeks ago:

Which seems much more encouraging when you look at how much of a change has happened in so little time.
Apart from digging about the place I've been doing the customary botching about where I pretend I'm capable of doing diy and using heavy machinery (the dumper and I are now on speaking terms after it nearly suffocated me with gases after it's exhaust broke)

We've started creating a new stone wall, which will eventually be a beautiful looking home for lots of creepy crawlies and little creatures. As it happens, making a stone wall is quite a skill which as with most things, I lack. I think I am starting to get the hang of it and it's genuinely very satisfying when a stone finds it's forever home in the wall.
Mam chose the starting stone for it's seat like qualities and Dad chose a decorative stump now called the Wolf's head:
And while we're on the subject of walls, I've in a little conundrum about what to do to separate the patio/gardens between the Stable and the Chapel when they're finished as I want something aesthetically pleasing but cost effective and I don't think that I'm going to have the time or skill to create a stone wall as high as we'll need. Jake stumbled across the idea of making a wall out of logs, and as we're all for recycling this seems like a grand plan. With some spare sticks I've had a little practice effort at making a log wall to see if it's even feasible and if it's something that any of us like the look of.
Nessa, Mam's dog, is fantastic company when up and botching about because she loves being involved, this does mean she is a little bit of a camera hog though:

That's the current idea for the separating walls, I suppose it takes some imagining to picture it as a full wall, and it might seem a little on the strange side, but I think it'll be a lovely contrast to the stone walls of the buildings, especially with some striking flowers in beds along the bottom. It'll be unusual and that's what we like over this neck of the woods.
Of course while I was busy building with logs, Dad was playing with the left overs that plumber left behind, some say an equally important task. 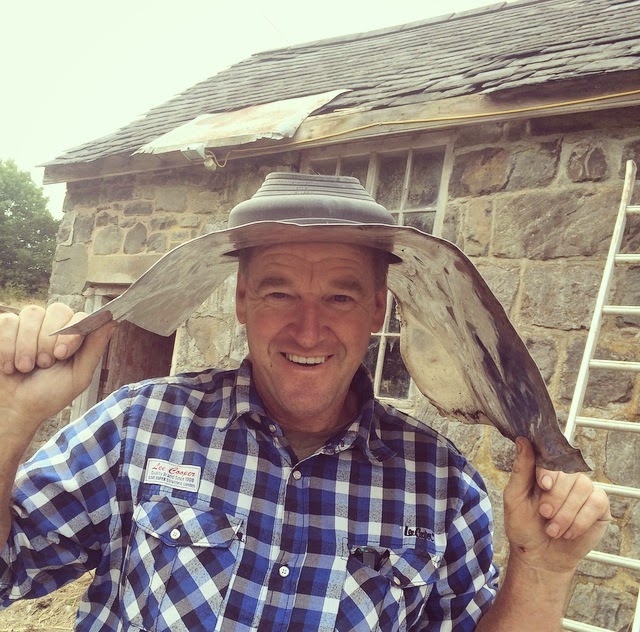 Today has been an utter washout with some serious rainfall, so I took it as an opportunity to sharpen up the beams in the cwtch. The beams have been in since the original cottage was built I reckon from the look of them, but they were boxed in as was the fashion back in the day. The previous owners took the boxes and most of the newspaper off but didn't really do much else, so I've slowly been sanding the old paper and rot away with a wire brush on a grinder (power tools!) in order to put some wax on them- brush on, buff off!
It's a little bit time consuming, but very effective, there comes a point in buffing it off where the wood gains a lovely shine and smoothness, and I definitely don't stand there just stroking it...
The beams running through them have been painted with a much darker sort of varnish that doesn't look right in the room at all, but after having a little go at sanding off the varnish it's clearly a little more of a mega job that I'm probably not going to have time to do for a few years! So I think we'll just live with them dark.

A week or so ago when the weather was still on our side Elliw, Mam and I went on a little walk up the river to do some more exploring. It's a mountain stream really, and runs through the land down our little valley with quite some clout, it looks lovely and feels like a big adventure when you start walking up it. 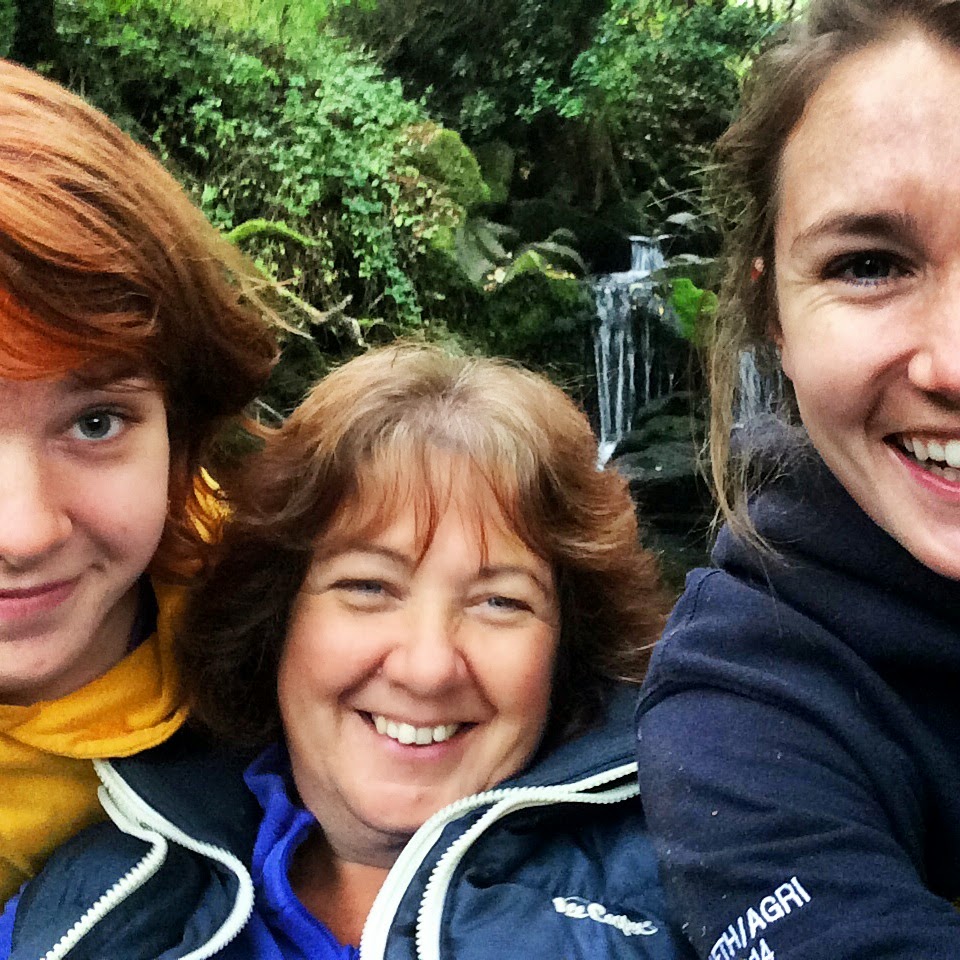 Finally a little snippet of some silly things that we've been up to. Pip is for some reason really scared of the bridge, she hates walking over it if she's had too much time to think about it and I think it's adorable.