Only 349 days til Christmas!

Well, we survived New Year too!
Jake's friends made the arduous journey up from Cardiff to the very centre of Mid Wales where they realised that the rumours were true- phone signal up here ain't that great.
The house was the perfect host, fitting all twelve of us in with room to spare. I completely forgot how much cutlery I had in the drawer though, so there was a little bit of a moment during the morning fry up where Jake started eating his bacon and egg with a spoon and a steak knife.


We decided to venture out on New Years Day (hangover? us? Never.) and as it happens there is a Holiday Tipi business on our neighbouring land where they have created a little valley walk for their guests and we decided to use it as our relaxed morning jaunt. You'll note I said "little", "relaxed" and "jaunt" all of which I'd anticipated.
I was wrong.
It was a little steeper than I'd expected and the weather turned pretty spiteful almost the instant we reached the top so it became more of a blustery hike where wind tried to blow you off the top and the rain stabbed you in the face.

But the views always make things like that worthwhile! And there are a few convenient benches along the way for a little sit down to really appreciate how pretty the valley is.
I imagine on a clear day it's even more impressive, so I'll definitely be heading back up the hill once the sun reappears. 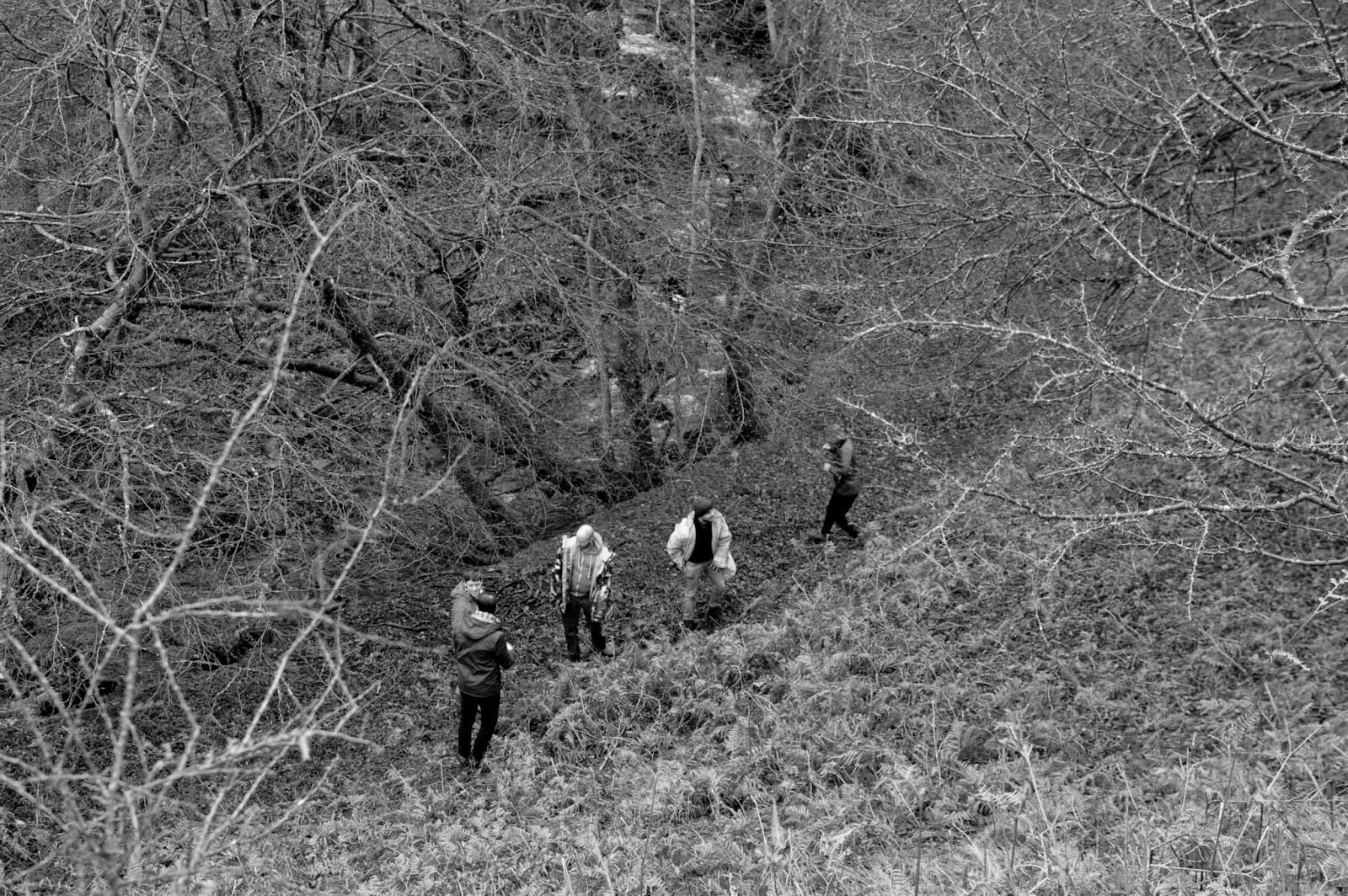 There was even time for Jake to be head guide on a river adventure and not a soggy sock in sight.
Thanks to the talented photographer M. Hodge for the atmospheric black and white photos!

During the first days of the new year we decided to make a quick visit to Ikea to finally get the bedroom furniture sorted, living with bags on the floor was starting to become a little bit of a hindrance (I'm playing it down a lot, it was starting to drive me insane)
We also picked up a linen cabinet and a workbench for the kitchen so that I can free up some of the cupboards for more storage space. 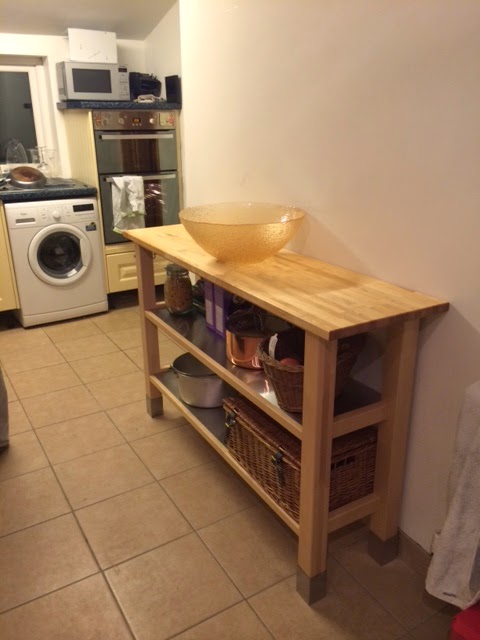 Now that we're living in the house and it's got all the essentials for a cosy home we can casually start piecing together the things that make it our cosy home, so obviously a floor length mirror was top of the list. (Jake likes to see his entire outfit before leaving the house) All in all it was a successful trip, now it's just fitting everything together. I don't think I'll be buying another blind in a hurry, it took my sister and I the entire afternoon to fit one in the bathroom window, probably because the window is quite an awkward shape and I'm not particularly accurate when it comes to measuring things. Luckily Elliw is pretty handy with a hacksaw as it happens so it's finally up! 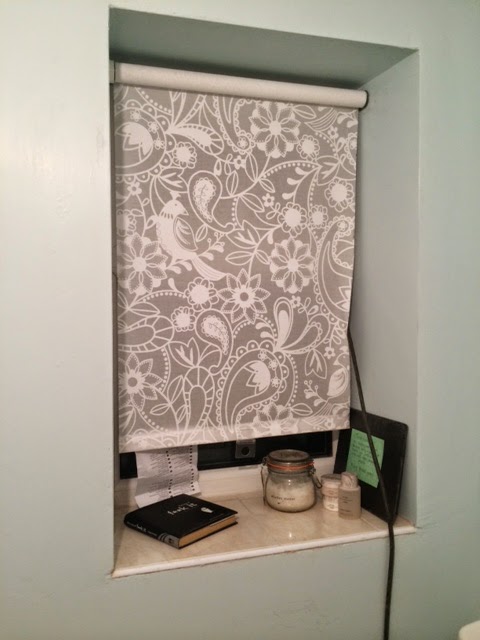 We still haven't a socket outside for the water tank, so that cable comes in through the bathroom window bringing with it a little bit of a draft, so the blind will hopefully lessen that now.

I've been browsing photos from back in August before we started work on the property and I can't believe the change now that we're living here. The house doesn't look like the same building at all! Mainly because you can't see it for leaves! I've put up a more recent photo for comparison.


These are the same view about a month apart, obviously one looks green and luscious and at the moment the other is mainly a lot of soil, but I think the difference in how overgrown and blocked in the whole house was to how open and warm it is now is pretty impressive. 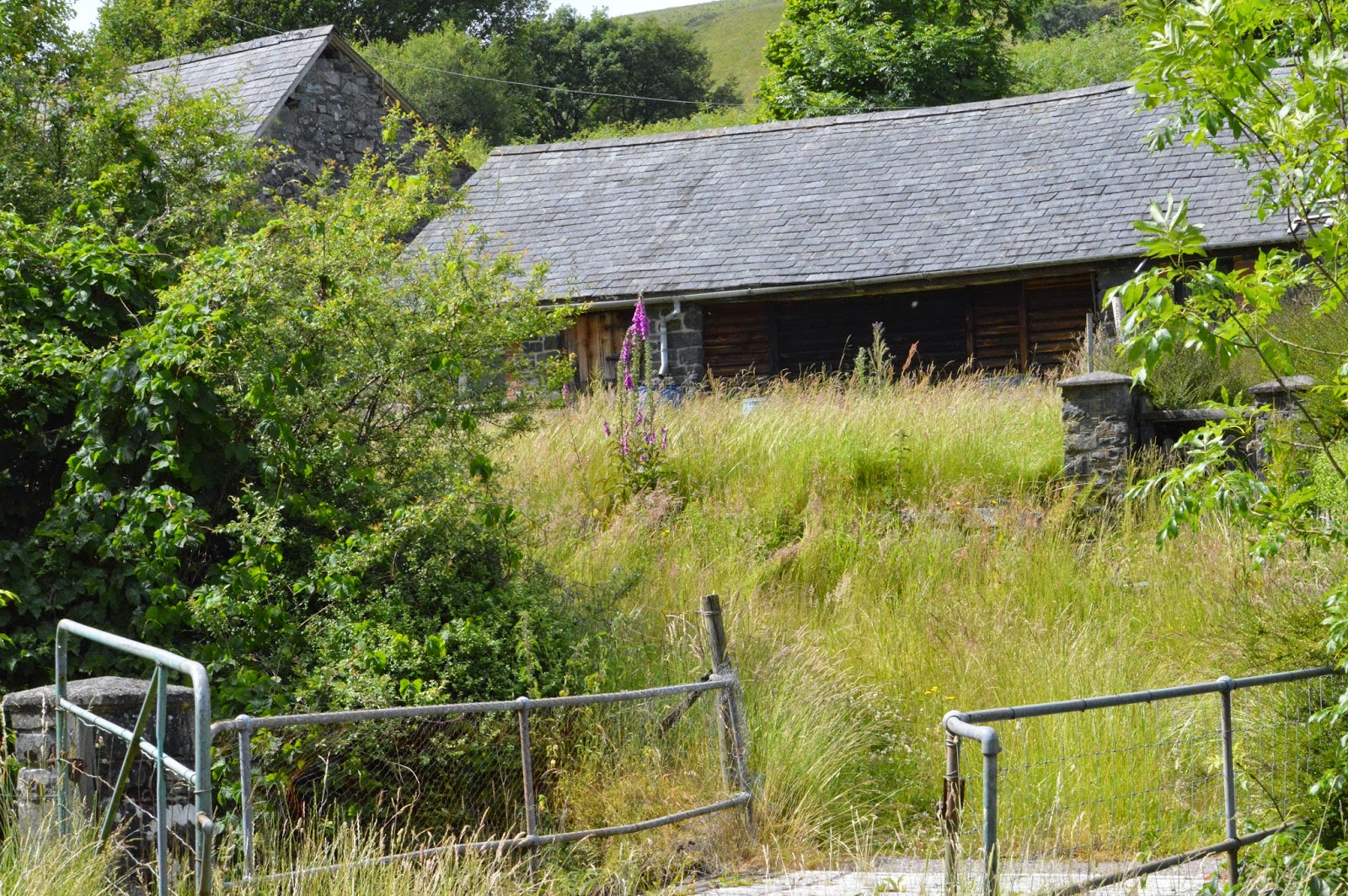 This the view from the bridge looking up towards the stable, and below is two photos displaying the most accurate way of measuring height and distance.

Here looking down the lane towards the house, just in view is the chapel but mainly in shot is grass.
It's great looking back at these photos, not for nostalgia but just to realise how much has changed and in so short a time frame. It's exciting to think how different everything will be by this time next year! 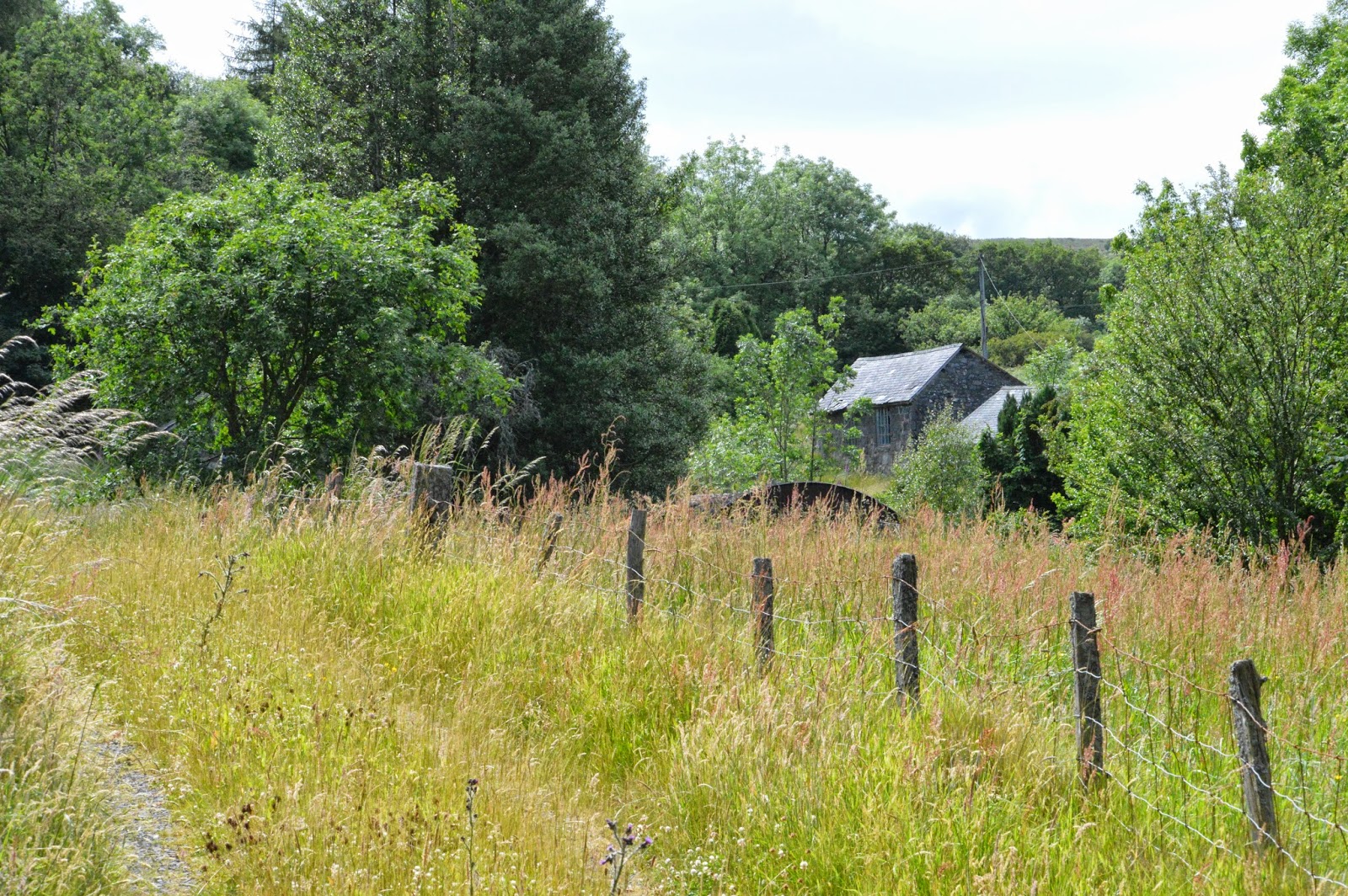 Today I'm leaving you with two photos, one is a photo of one of my partners in crime who's feeling a little under the weather and deserves some fuss and attention 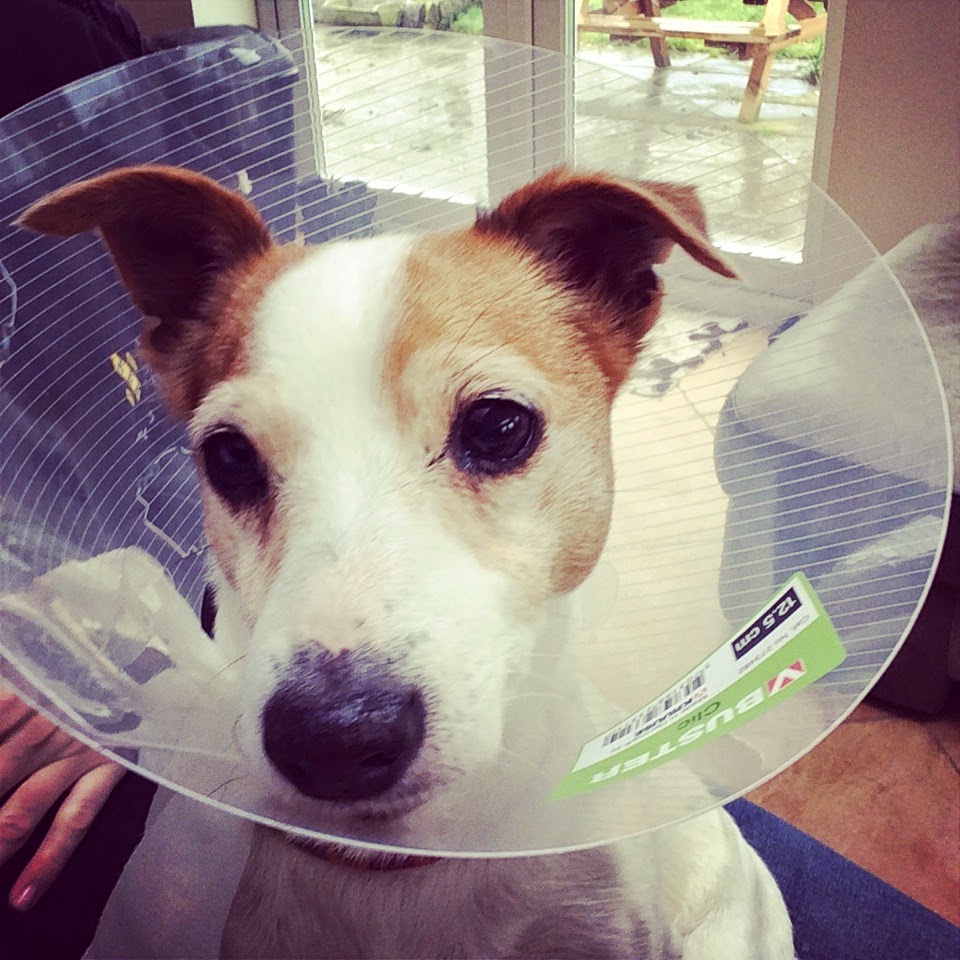 The second is a photograph Jake took one night early this week before all the wind and rain came. It's the view from the front door down the valley, it's in the same direction of the earlier photographs that show all the cleared away bushes and scrub. If all of that was still there we wouldn't get to look at this from our doorstep, so even though it looks like we've been pretty drastic in opening up around the house I definitely think it's worthwhile when we get a view like this. 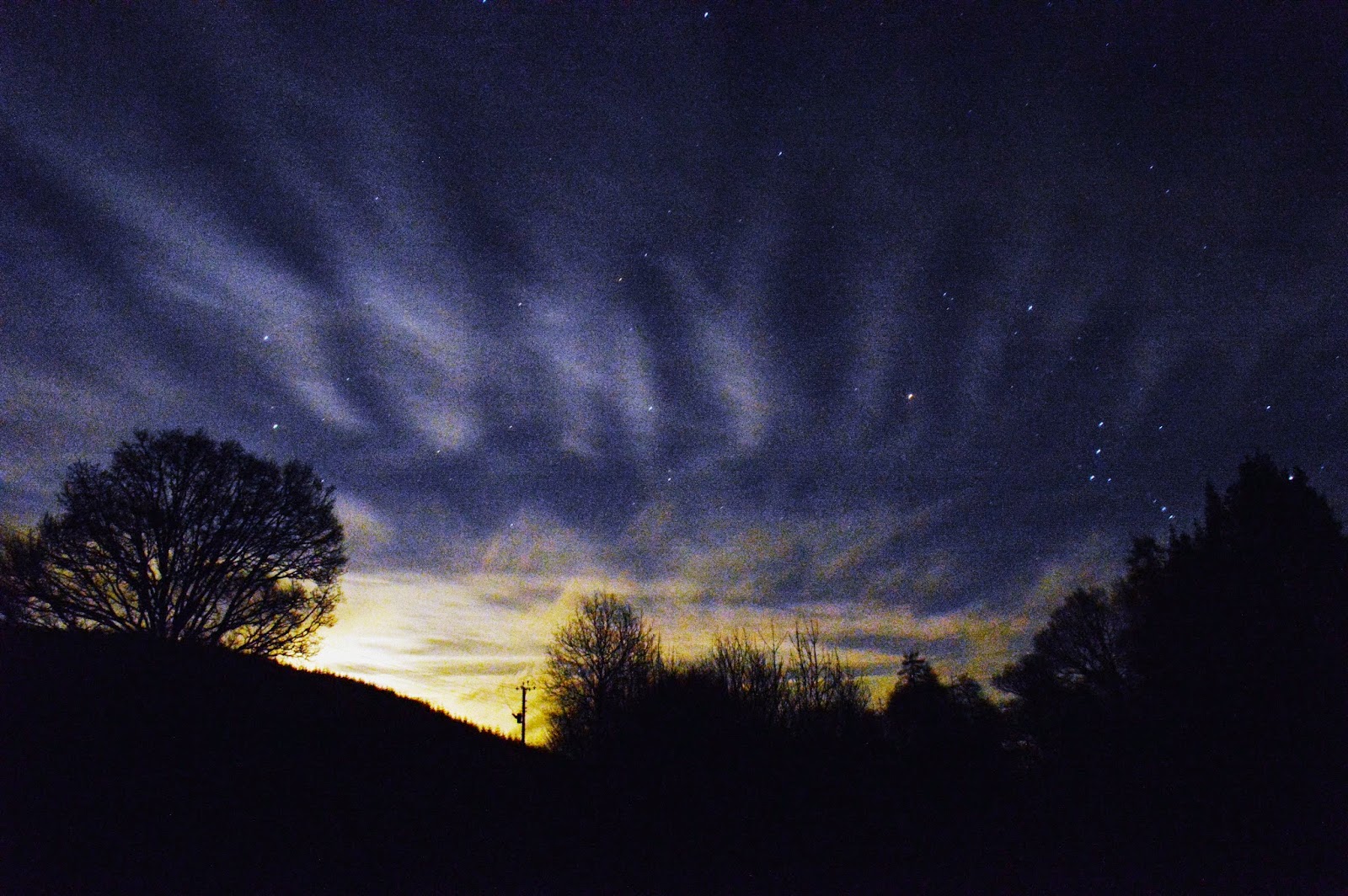