Not so smooth sailing

The latest panorama for you to have a good look at, I've been staring at the first one I took and I can't get over the difference I see between the two. It's hard to imagine what it looked like last August so I'm glad I've taken photos to remind me how much of a change we've made. I still wish I'd taken more though!

Nope, still no planning permission. This time one of the outside parties who was supposed respond with any requests by the end of the consultation period (JANUARY) only sent the email with their requirements last week (APRIL)
Now I'm not naming any names (because I'm living in a state of paranoia that the slightest thing I do will risk the whole project) but I have to be honest in saying that failing to respond in January and leaving it until April to realise your mistake takes the absolute piss.
Perhaps a proposal to develop a new local business by a local resident to bring money into the local economy is utterly ludicrous? It genuinely seems like the people who hold all the cards to my planning getting approved have decided that the best way to make the most money for the local economy is to get me to pay as much money over as much time as possible through what would seem to be their own incompetence.
I could write two essays and a TED Talk on this process and it still wouldn't be enough.

In the meantime we've cracked on with our odd jobs and a new wall has been completed. Sunny weather makes for pretty efficient wall building, it made a change being covered in dust instead of mud. This wall is a little taller than the one in the car park as it is a continuation of the residing wall that runs along the lane. It takes a little more effort to build a wall without a nice big earth bank behind it to rest your stones on! 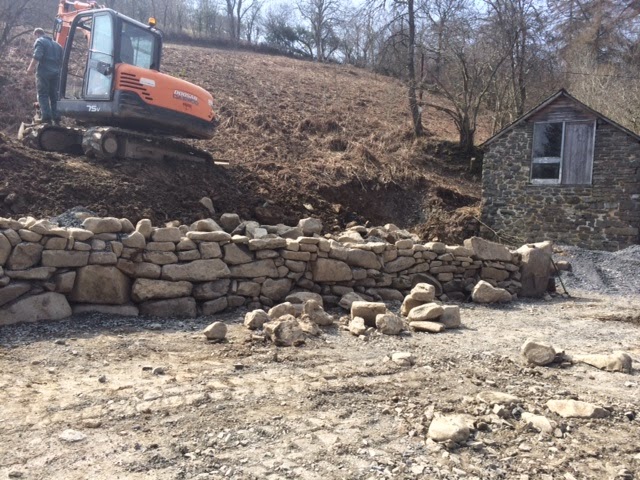 Of course you can't spend all the time rummaging around in dusty stones, so I took a little break in the sunshine to play in the river with my sister and the dogs. The water is lovely and clear but it's like ice, reminding us that we're still in Mid Wales and a little bit of sunshine doesn't mean tropical waters!


Whilst clearing up the site this wash board cropped up all grimy and forlorn. So I washed it, sanded it, and finished it off with my faithful brush on wax that I use on absolutely everything! It just needs to find it's place now that it's all shiny looking. As I mentioned previously I'm pretty shoddy on the memorial photos front and I failed to take a picture of it in it's original dirty state but these
showing before and after I put the wax on is close enough to see how much more you can get out of the wood when you polish it up. As with the beams inside the house the wax really brings out all the knots and individual marks and grains in the wood.

One thing I have yet to discover for myself is the pure, unadulterated bliss that seems to come from driving a digger.So much bliss that Dad and Ioan get into scraps over who gets to do the next bit of digging! I asked them both what their favourite part of driving a digger was: "Scoopin'" was Dad's reply and Ioan gave me the insightful "Diggin'" So there it is.
I might have to start making a rota for them before it turns nasty, but I can't complain about the amount of help I've had with landscaping and stone wall building and endless, endless digging. Dad's ability to balance a boulder into place without dislodging an entire wall with the bucket of the digger is something else and so as long as one of them wants to drive a digger then I'm happy! 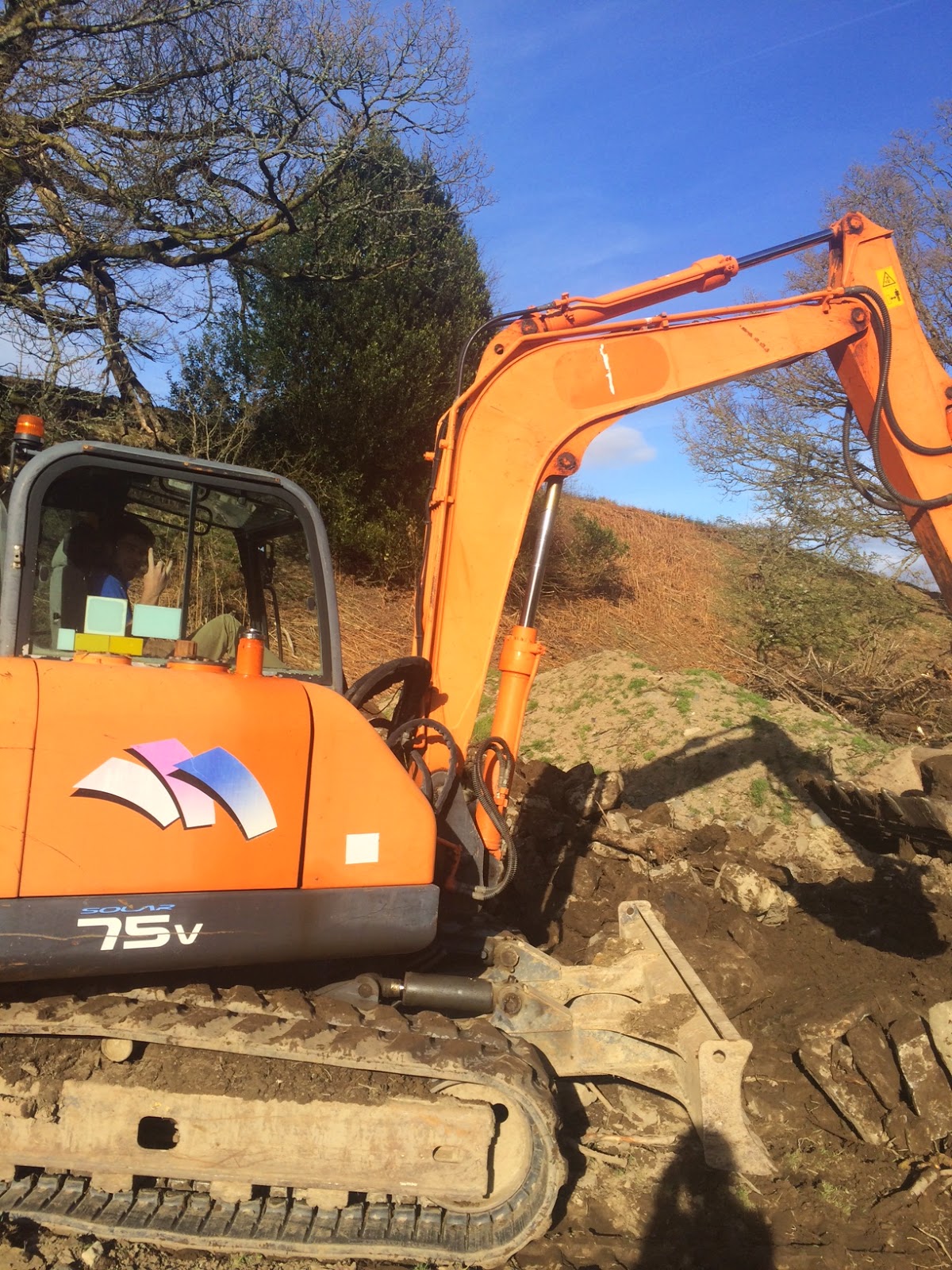 Now we've had a little bit of a hiccup with the entrance of our property.
As already mentioned in previous posts we've placed a handsome stone at the entrance of the lane upon which our house sign has been nailed (if you remember at Christmas our first version of the wooden sign was stolen mysteriously disappeared)
It would seem the council highways department has received an "anonymous" complaint about the stone and as a result we have received two letters and two site visits letting us know that the stone needs to be moved so that it is in excess of 1.5 meters from the edge of the highway.
We have duly obliged, moving the stone the full 40 cm it needed for it to now reside a safe 1.8 m from the edge of the road.

Obviously this was a bit of hassle for us, but I actually think the stone looks better in it's new spot, even if the daffodils are a little worse for wear and don't frame it so nicely anymore.
So here is the last photograph of the mighty sign stone in it's old spot, ah the memories. 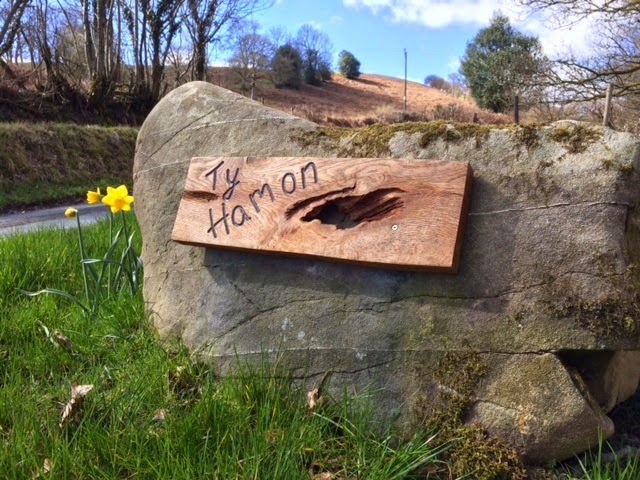 The walk up to the top of the hill behind our house has become a quick jaunt to take stock of the valley in the different weathers. One evening last week after Jake finished work he saw the sight of me after being in the sun and dust all day and decided that looking at the view would probably be better so we wandered up before supper and took some panoramas of the sunset looking down on the village. 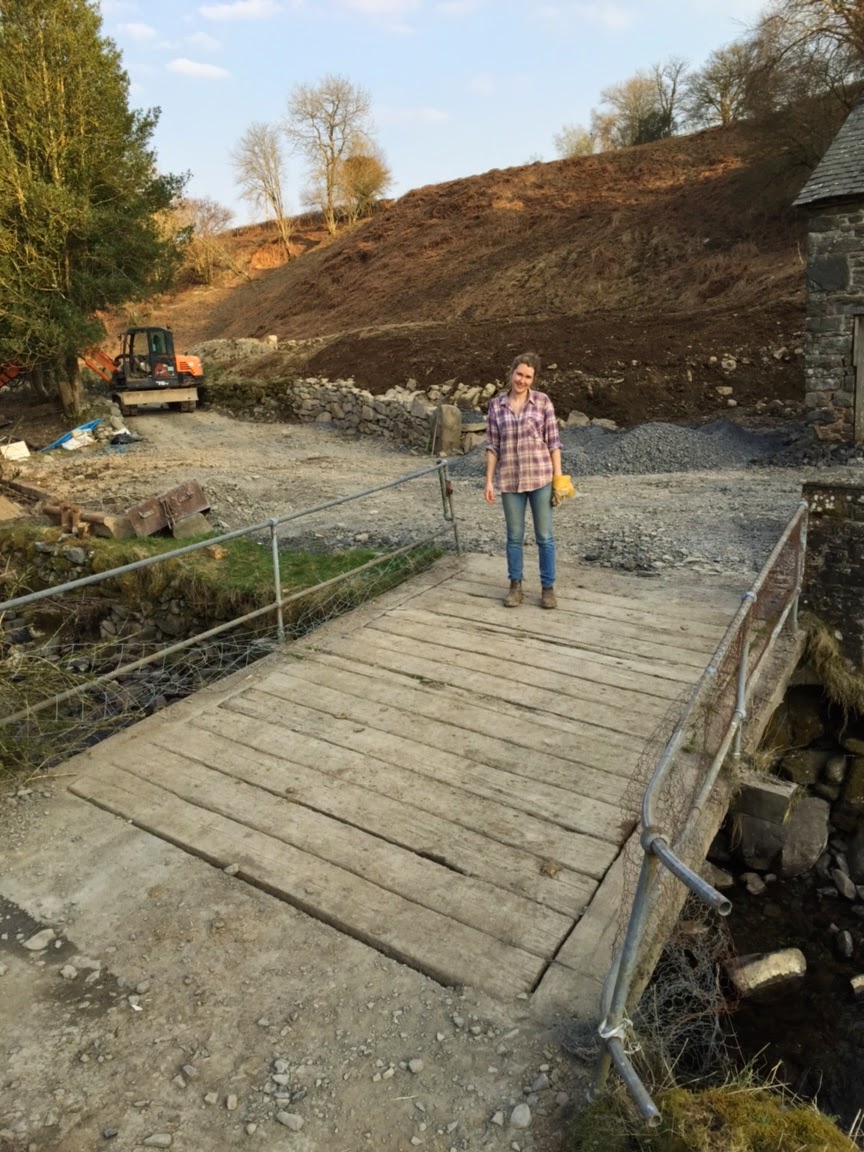