This is going to be a quick post, but only because I like to document little events and this bank holiday was the first BBQ of the year and the very first one in the house so definitely an event worth documenting!
The weather was promised to be on our side and Jake's family were up for the day and that combination can only mean one thing- barbecue. It was a little makeshift because I wasn't as organised as I usually am and my stash of paper plates had become quite depleted since New Years Eve but we had plenty of food, and by food I mean mainly meat because my salad buying skills only stem as far as an iceberg lettuce.
Lisa and I created a very chic serving table out of a pallet on some scaffolding so it was almost a buffet, really what more can you ask for.
The weather wasn't quite as sunny as it had promised but it was warm enough, and when it did start to cool down Dad and Ioan got creative and made some firey wood pillars, beacons of warmth and quite a lot of smoke! All in all I think it was a success so watch this space for the next one- hopefully with more sunshine and less rubble dotted about the place. 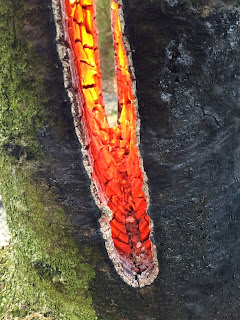 As I mentioned in the previous post we've started working out some landscaping around the front so that it can start getting green about the place. In hindsight we should have done it when we took the first garden pillar down last year but it's difficult to imagine what you really want to get done immediately, and I think we'd made so many changes in the first few weeks that some of us (me mainly) were daunted by the idea of taking out any more walls or steps. It can get a little overwhelming when it happens all at once, so Dad very patiently waited until now to finally do it. I would say that I won't question his judgement again but it would just be a lie.
Here's the latest panorama to go up against the rest.