I hammered my own hand this week

I've finally finished painting!
Sort of.
I still have the weatherboards to do, and really, I should probably paint the drain pipes seen as I'm not the most neat when it comes to painting around things and the black drain pipes are now looking a little 'Honeysuckle' striped.
This is the finished paint work, with a little gap left under the bottom window for when we get the french doors fitted (Yes, that's right, we're so cultured our doors are going to be French) 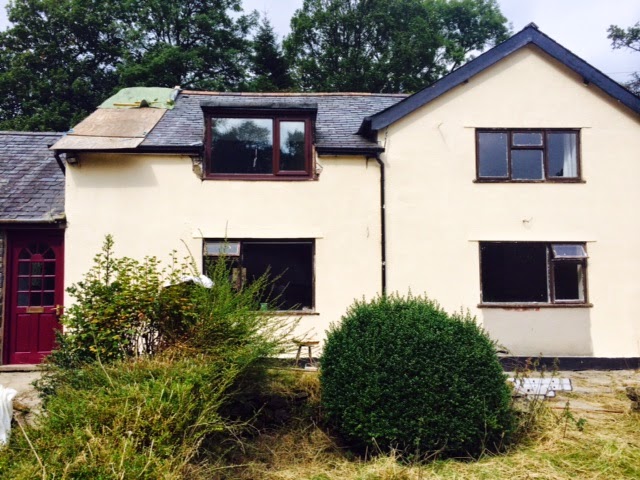 We bought enough paint to entitle us to free tshirts from Boys & Boden, which went down a storm, absolutely love a freebie. With the last bit of painting came the first injury of the renovation; Elliw made a spectacular fall from the wall at the end of the garden, her foot caught in a bramble leading her to fall in what I wish I could describe as a graceful style, but it was more like a sack of rocks into the mud below. 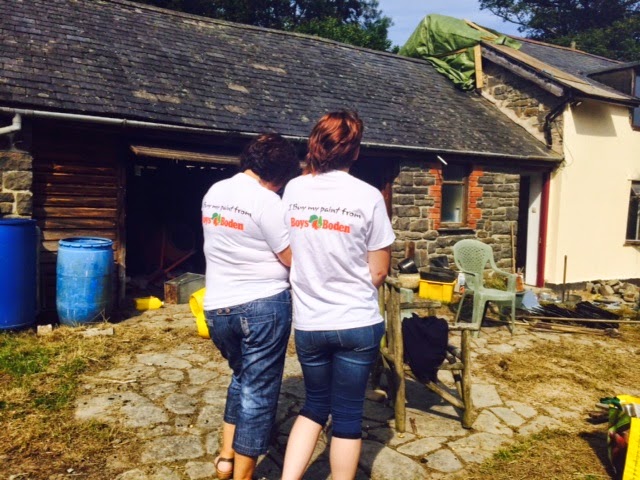 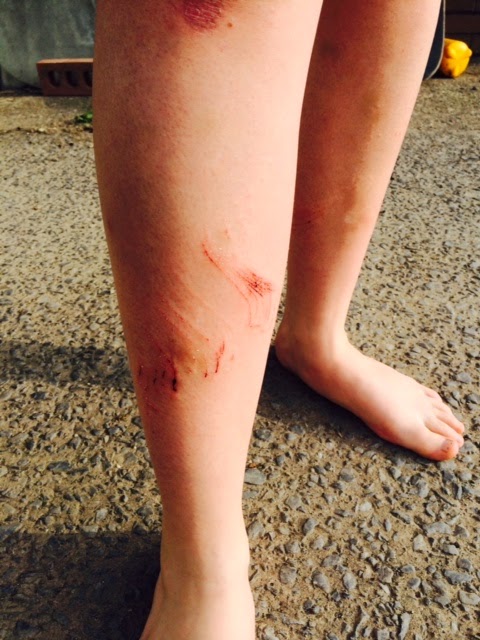 This week the new cattle grid arrived thanks to the welding expertise of Rob Jones who delivered it with a very demure comment about hoping it doesn't break. I'll let the photos speak for themselves as to whether or not you reckon this grid is going to snap anytime soon. 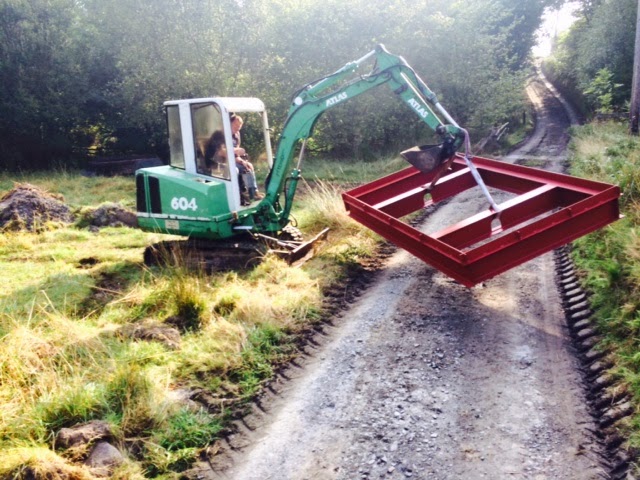 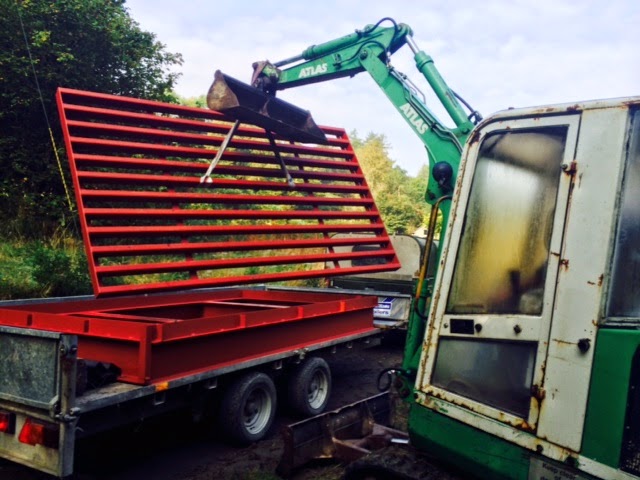 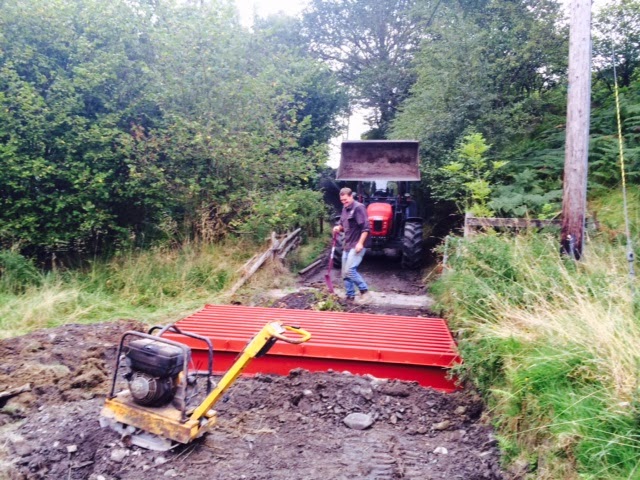 With the grid in Dad wanted to crack on with the road, so the top layer of mud, years and years of mud, was scraped off and good stone from the local quarry put over the top as a new layer to firm it all up and stop it turning into slop as soon as it rains. This meant lots of shoveling and use of the bit of kit Dad has named "The Nemesis" purely because he found it funny when it chased me.
As you can see from the evidence, I was not happy to be given this job: 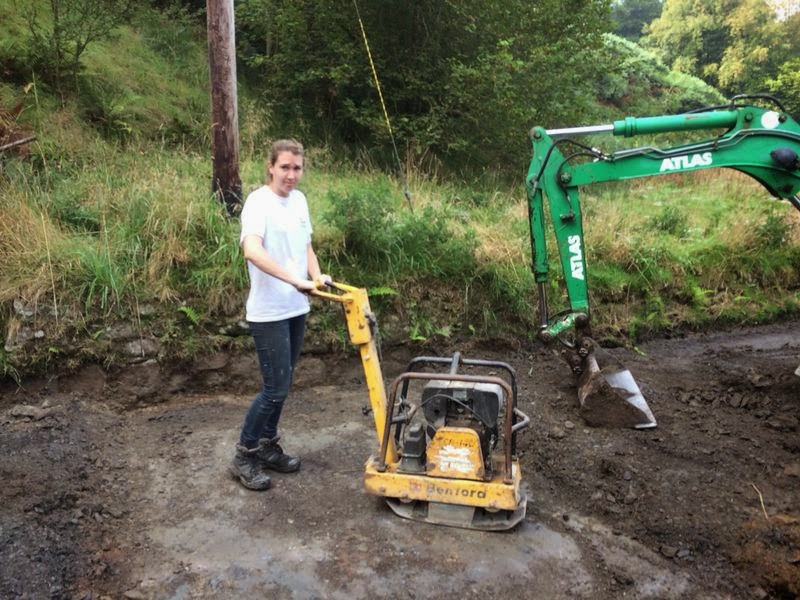 Jake however, took to it like a duck to water 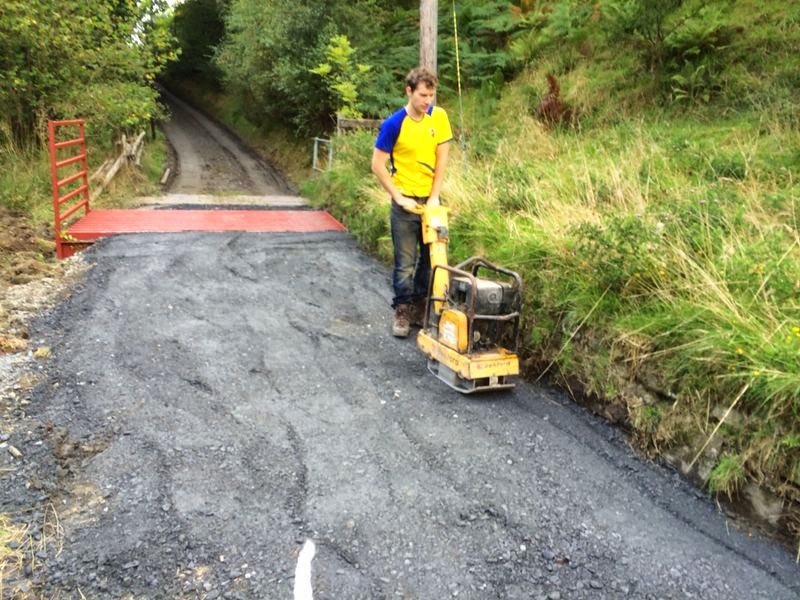 Now we have a lovely dry road leading down the lane, so there's less worry about needing 4x4's and farm machinery to get to the front door! Our two little cars can make it up and down quite happily.
To complete the roadworks it was time for my wooden sign to find it's place at the entrance of our driveway. I made it a couple of weeks ago while I was still living in Cardiff on a weekend up here and it's been waiting patiently to take it's place at the end of the lane. Of course everything must be done in it's correct order so first we had to make sure the sign was given the perfect spot, after clearing back all the fern and hedge to make a safer entrance way we threw some grass seed down, by next spring it'll be a lovely green patch and if I get my act together it'll have some daffodils and snowdrops planted too.
Then came what is potentially the most important part of sign placing: picking the stone.
It has to be just the right stone and I really haven't developed my intuition for stone selection yet so I was guided by the stone speaker, my Father, who is one of the "naturals" in being able to hear the stones and find them their true calling. 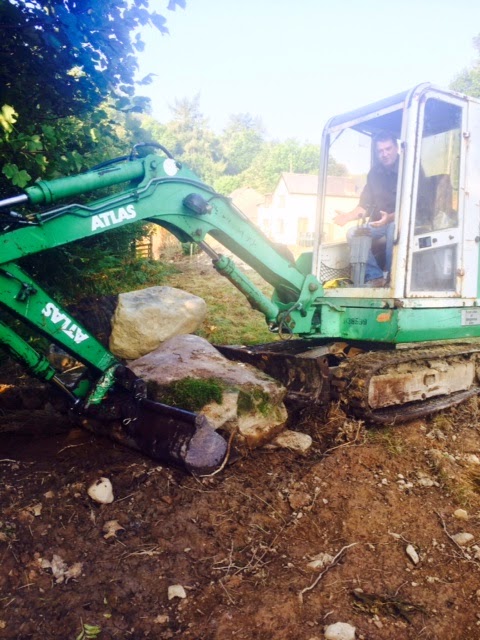 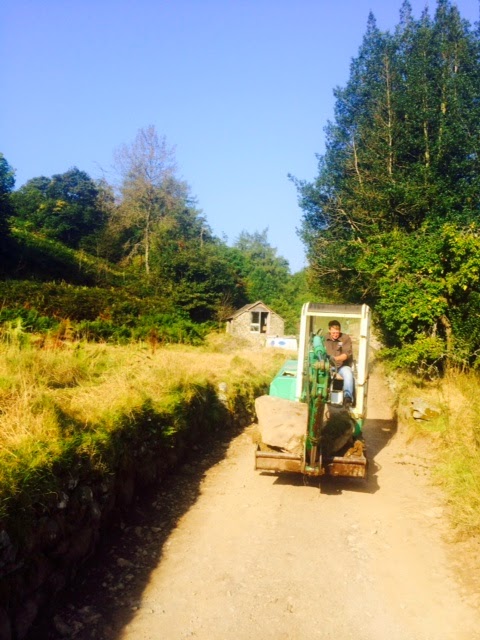 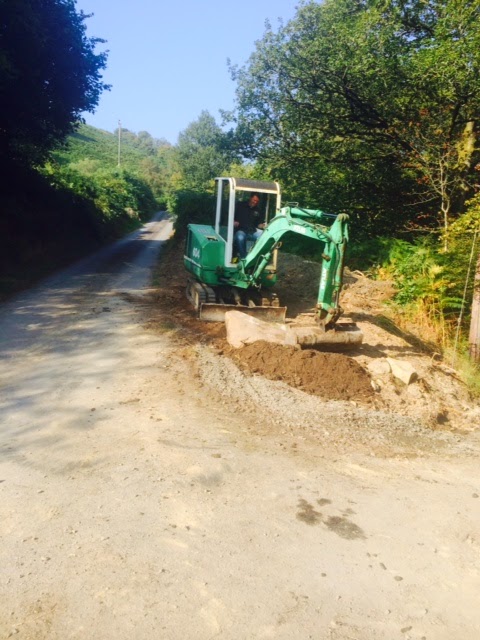 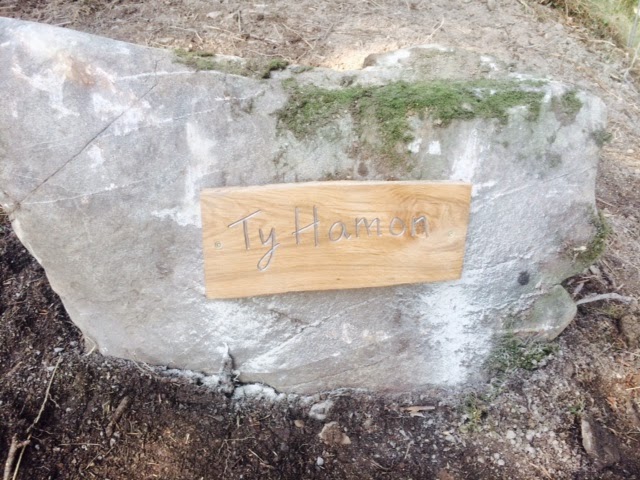 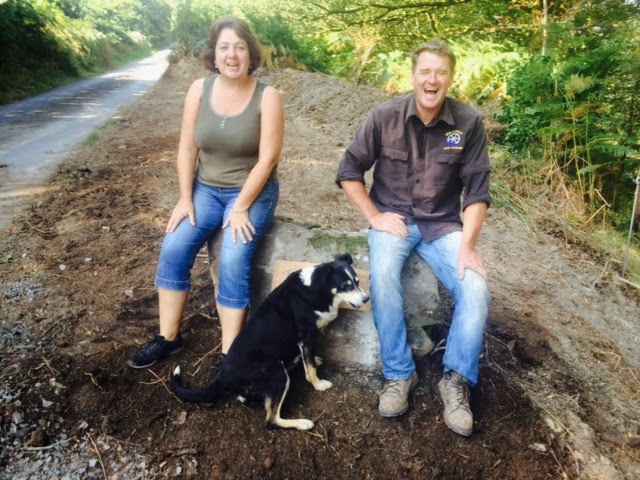 Jess wanted to be in the photo of the sign with Mam and Dad, but she didn't realise that it was a photoshoot mainly for the new sign. I didn't want to tell her to move though.

The remainder of the week has been spent digging, dumping and general moving of heavy things. We've been clearing out around the back of the house and the two buildings, so many stones, so much soil. It means Dad in charge of the digger, sometimes under the instruction of Nessa, and I get dumper duties. The house is looking happier every day, so much light gets around it but there's so much more clearing to do, landscaping is some job, I can tell you now, and we haven't even got to that bit yet. 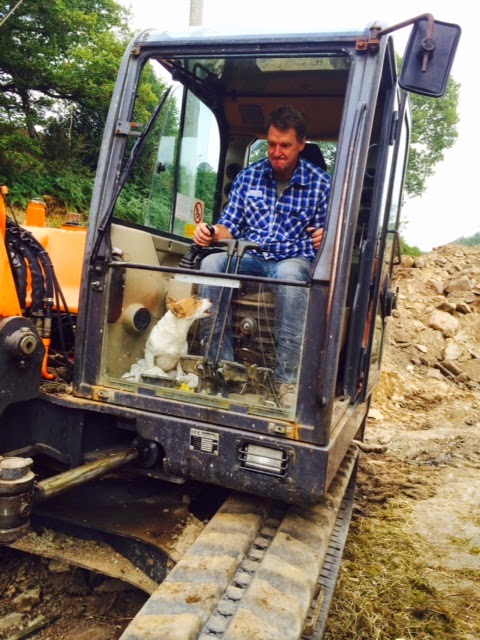 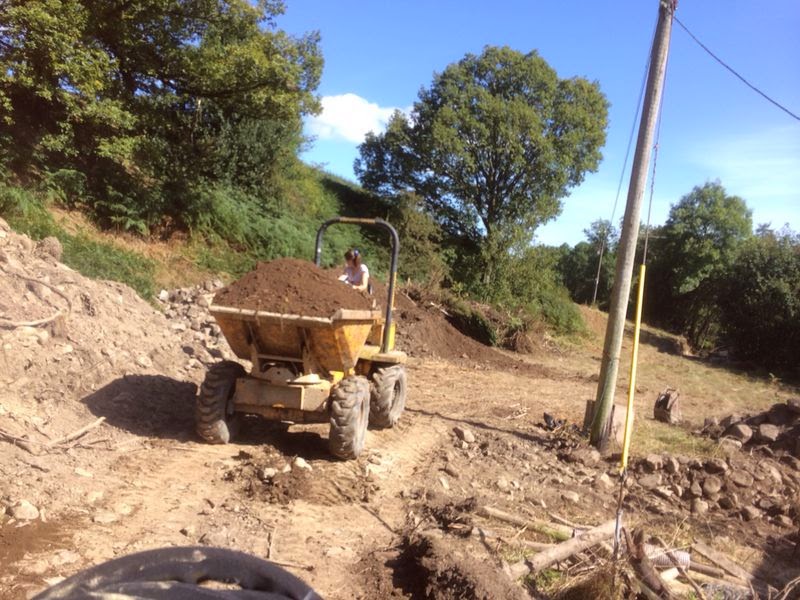 I've also had a crash course in pointing walls from GP, which means him doing it once perfectly and me slopping the mortar around a stone and him politely telling me I'm a natural. That's mainly what I've been doing today in the chapel. We've picked a wall that is eventually going to be covered by some sort of plaster board, so it doesn't matter if my pointing doesn't look so good to begin with which makes it a good chance for practice. It's also the wall with the biggest crack in it, which means my pointing is mainly scooping mortar into giant gaps in the wall. It's the raking out of the old mortar that's the most time consuming because it's all crap and it makes my arm tired. Not that I'm one for complaining (this is a lie I complain all the time, especially about things like my temperature, currently I'm too cold for anyone interested) 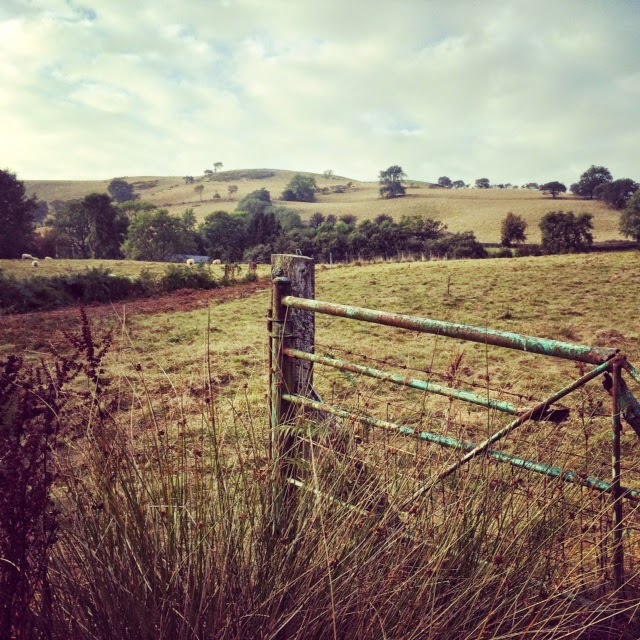 This was today's view while I was doing the last bit of dumper driving around the back of the chapel. It wasn't so sunny as it had been for the rest of the week today, but it still looked gorgeous, so I couldn't resist a little snap of it! Below is the most recent panorama view, for anyone keeping tabs on development since the last one.

Lastly here's another little video, this time of this week's shenanigans