First Christmas in our house can be written in permanent marker on the "Success" list.
The house was warm, cosy and full of people and food so it was pretty much perfect, even if I do say so myself.
Jakes family made the journey up from Cardiff Christmas Eve with a cooked turkey in tow and a car full of food enough to feed the entire village. We were joined by my parents and sister and we ate a lot, drank too early in the morning, sang karaoke, played naff games and drank and ate some more.
Even my digging helpers and mischief makers, Pip and Nessa joined us for Christmas day and had their own little present. 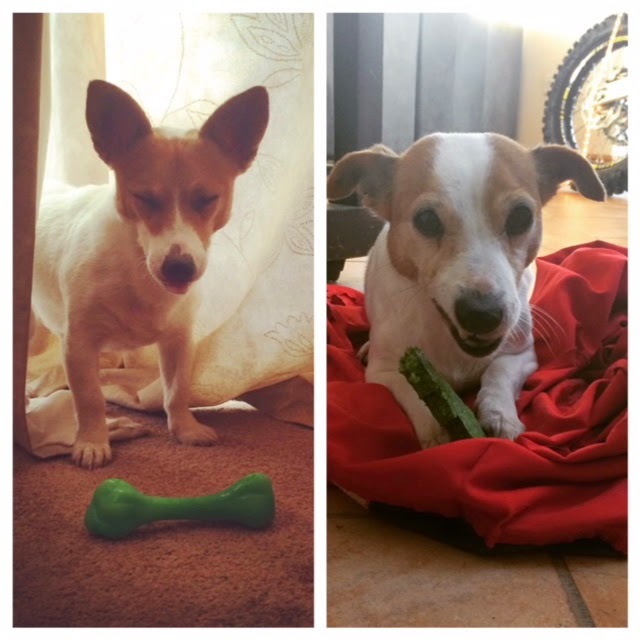 Jake and I finished painting the spare room and hallway Christmas eve just before everyone descended so the house looked ever so pleased with itself. The fireplace in the living room is all spick and span and in fully working order so with a fire in that and the wood burner going thanks to Jake's brother as official log monitor it was pretty toasty downstairs.
Jakes Dad, Steve was almost always too hot, but that may have been down to the onesie he couldn't bare to part with or maybe all the lychee martinis that we drank. Apparently they're all the rage, and Jake is now pretty slick when it comes to making them.
All in all I think everyone had a good time, I certainly did even though I got tired and grouchy when I stayed up too late and we even had some snow on Boxing day to give us a nearly white christmas. Which made for a lovely walk and photo op! 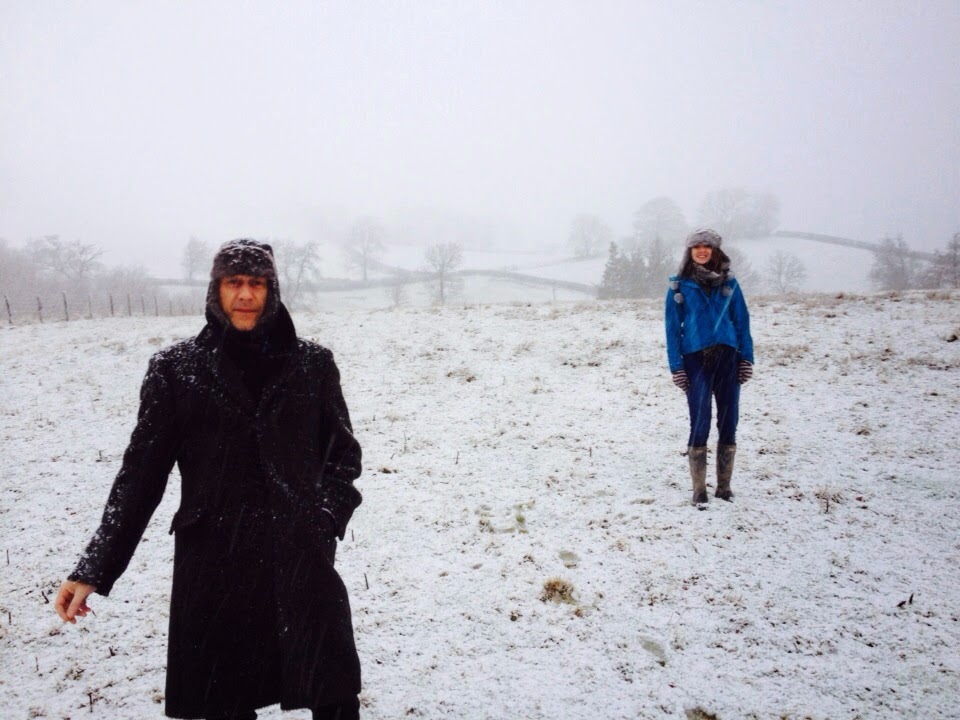 This photo looks like the promo picture for a really crap punk band, so it's one for the family photo album, obviously. 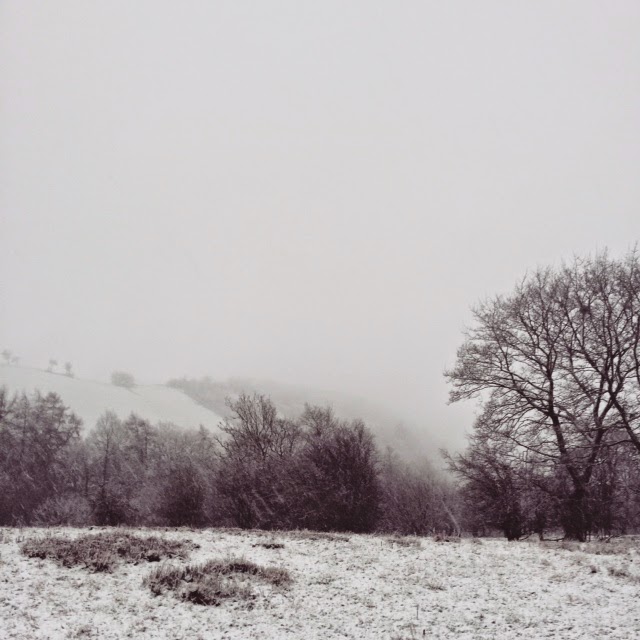 Now, before Christmas we had a little hiccup with the sewage system. It blocked. Which isn't surprising considering the house had been empty for so long. Anyway, it needed unblocking, which meant some poking around with a long stick and some digging, which we all left to Jake. Fortunately it was fixed well in time for Christmas so we could flush until our hearts content. 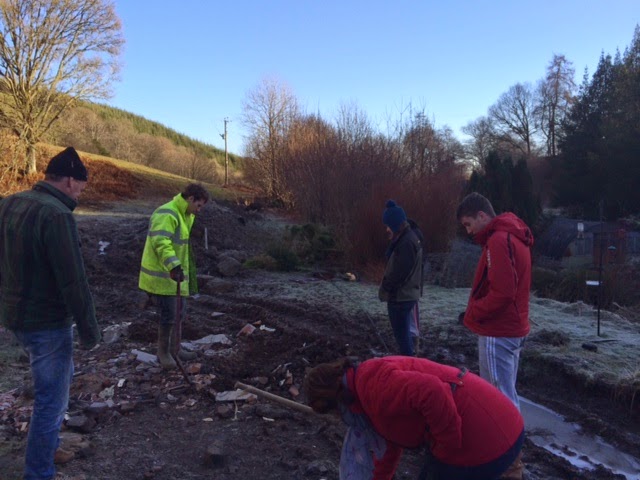 And remember these dining chairs that I was going to reupholster a few posts ago? 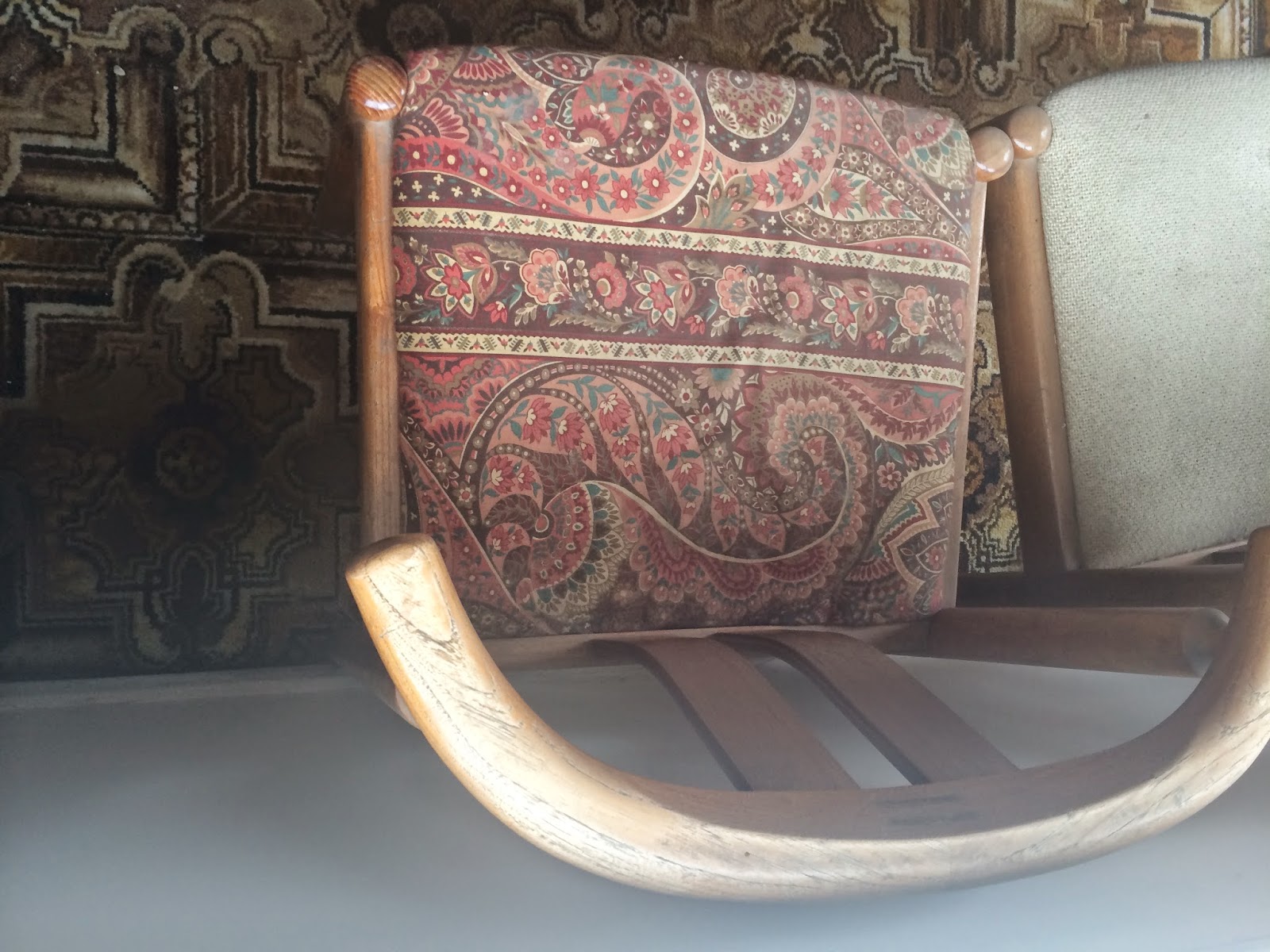 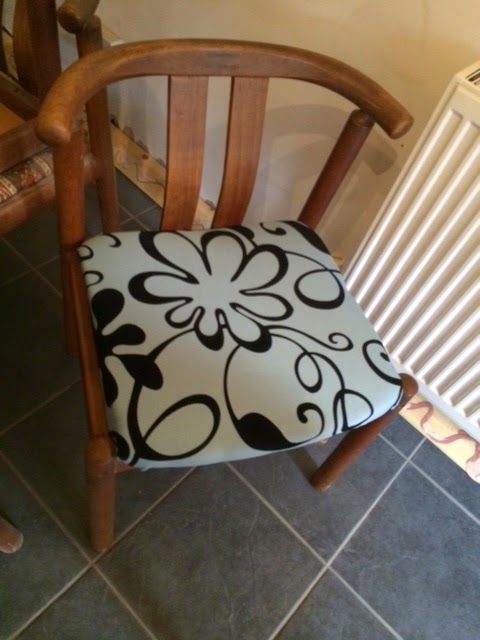 8 beautiful dining room chairs with extra foam cut for the seats. I also painted up an old bedside table left in the house, adding new drawer knobs to make it a little fancier. 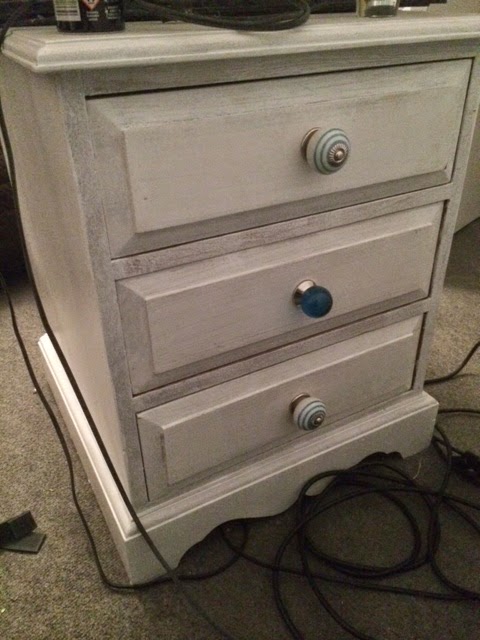 I had better get to showing you the new fireplace, the last post showed it looking pretty bedraggled. It has since been rebuilt out of blocks with a slate surround (stuck on with lots of gator glue), rendered and plastered to be topped with an oak mantle piece that Dad dried, planed and sanded for us. The pièce de résistance is the paint job, leaving us with a lovely contemporary looking fireplace that is unique to our house. 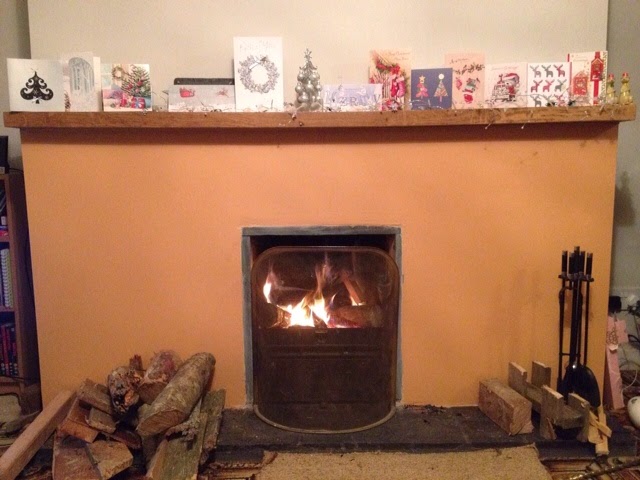 We've also had a little bit of a scandal. When driving up the lane Christmas Eve I was struck by a horrifying sight, our wooden sign that I'd made a few months ago had vanished.
Baffling, right?
We were completely stumped, it was screwed onto the rock so it wasn't going to just fall off, someone has deliberately taken it. That's right, genuine vandalism! Would you believe it? I lived in the city for two years, nothing, I live in rural village for four months and our property is vandalised and stolen. I'm sure you can tell from my tone I'm still pretty baffled by it, I just can't imagine someone doing it, least of all the effort taken to do it. And I feel a little disappointed, I made that sign, my Dad and I put it up and I felt ever so smug about it, because I thought it looked pretty and someone has torn it off the stone and I imagine just discarded it like a bit of rubbish, or used it for fire wood.
And on Christmas eve, just when a house sign is needed the most. Santa had a hell of a job finding us. 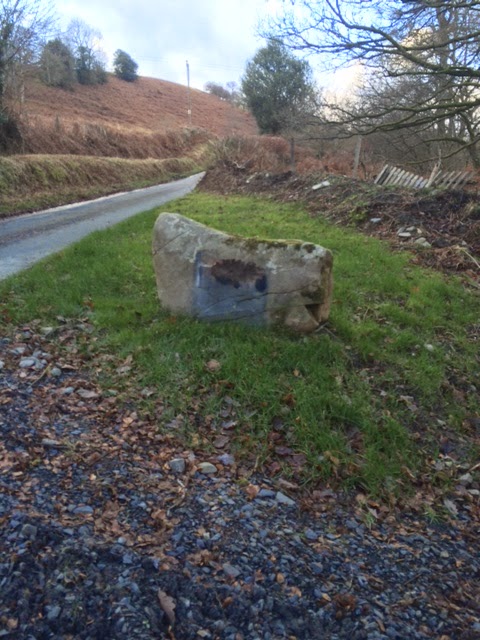 Needless to say we're already on the case of a new one because I can't bear looking at the rock all naked without it's sign. 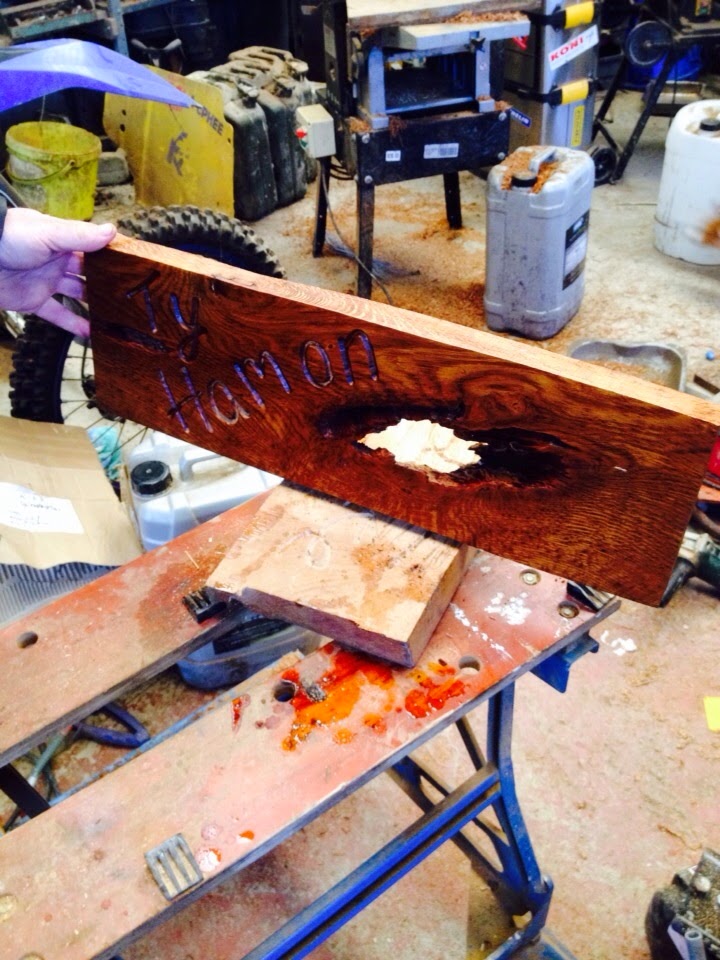 I just need to paint the lettering (I need to go buy a new small paint brush) and then it can take pride of place up on the stone.

Today we also had to cover the water pipes outside, because it's pretty cold and we haven't managed to bury them yet, so old sheep feed bags and some sand has had to become a quick insulation fix, especially as we're having a little shin dig for New Year, so we definitely need water without any extra ice! 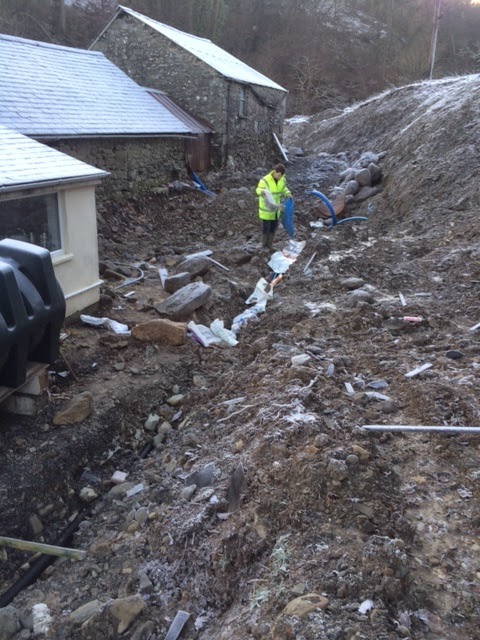 Here is the video I promised of the water being struck in Novemeber, quite impressive!

That's it for now, back to work in the New Year. Getting back to it in the outbuildings, now we've moved in I've got no excuse, and there are some walls that need some serious attention.