I've been growing things, and they've been edible too!
As I've mentioned before there is quite a significant amount of landscaping to be done, although Dad and his digger have moved more stones and soil than you can imagine nothing is quite permanent as it's difficult to see what you want to happen before things get cleared and other things develop. With this in mind there are few places where I can commit to growing plants, a flowery garden is not something I will be looking at any time soon, but a potato patch is just grand.

A month or two ago we stuck some potatoes in the ground beside the river on a bed of muck Ioan kindly donated, they were a discount bag of potatoes I think about 7p a bag because they were going over the ideal time to plant them and they have thrived, for the most part.
Oddly enough the ones planted on top of the muck haven't done as well as the ones on only topsoil but they've been in just the right spot for my sort of lazy gardening where I can have a good nosey at them when I walk past from the car park to see how they're getting on.
Beside them we planted some little red and white onions that suffered a little onioney massacre from the sheep who managed to break into their compound when they were up here grazing. They survived the sheep attack but remained quite small, their flavour is pretty big though, so I'm still pleased with them.


After the flowers finished blossoming I dug up the biggest rice which proved to have a whole heap of potatoes buried underneath, served with some butter and home grown mint from the pot on my new patio step. 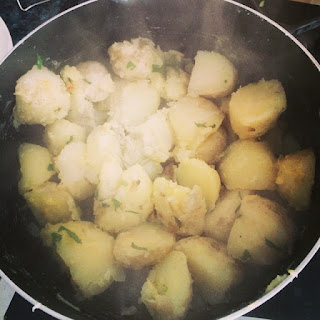 I've also had a crack at an old recipe to make some elder flower champagne and cordial as I found an elder flower tree growing behind the house with some mighty flowers hanging off it. I've used the recipe of "Hen Anti Edith" or Great Auntie Edith for any non-welsh speakers, but there is no real guarantee that it's going to taste any good at all because I'm not entirely certain I've done it right. We'll soon find out in a few weeks when I open the jars. It looked pretty good during the process though which allowed me to get a pretty sweet instagram shot, so there's always that. 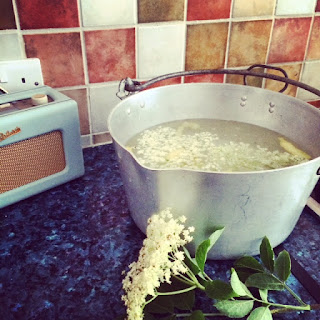 As there's no real guarantee at the moment that what I plant will still be there in a few weeks time with all the changes that are underway I'm not particularly keen on sticking anything nice in the ground for keeps, so I'm potting everything and anything. My chives are doing particularly well in an old bucket, and I have some lavender in an old watering can to match.
I'm basically potting and taking cuttings of everything so that I have more of a hoard of things to plant once I'm ready to cover the banks behind the chapel and the house permanently, it's like a very poorly managed garden center here. 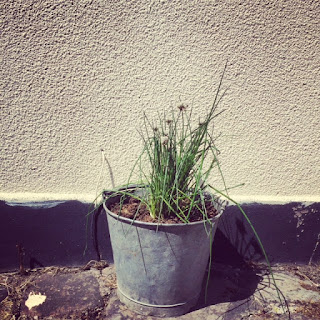