We have some steps now

I find this statement genuinely terrifying, how quickly has that year passed? I can barely believe it.
If I'm honest, I had anticipated that we'd be much further ahead in building by now if not finished entirely but everything that could have held us up in the process so far, has done, so we are a little behind the clock.
The realization that it had been a year with the keys to the house came and went without much celebration (of course we did manage to squeeze in one or two bottles of fizz)
With the month of July came reinforcements from Cardiff and China! to help with some landscaping. Who needs a team of professionals when you have endlessly enthusiastic friends who arrive bearing gifts of Prosecco, chutney and fancy bread?

The steps in front of the house have been in the works for a while, the main thing is being bold enough to stick the mortar down and lay them in- it's quite a commitment considering these are the steps to the front door, so really something we're all going to be looking at pretty much every day.
We decided full steam ahead seen as we had a new workforce for a weekend and could take advantage of the fact that we could blame them if it all went wrong.
It's all about the right stone selection which Anna and I started on with Jake in the morning, fetching enough stones to piece together a larger step than the first two already laid so that the stairs became like a steps/path hybrid. The next technique for good steps is loyal use of the spirit level and remembering not to step on the stones you've just laid into the mortar- unfortunately the latter was a little more difficult an instruction than first anticipated and we now have a section forever more known as Ben's Wet Patch where the rain water puddles at the back of the step.
But it's all character, right?

With the boys playing around with cement and rocks the girls were tasked with the more heavy duty: unloading timber and carrying it all to a better spot, which they did with poise and glamour- not a bead of sweat in sight! 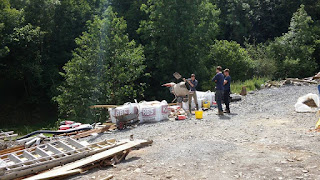 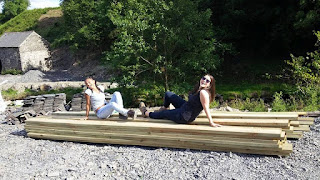 Of course there was also just enough time to play with the big toys and I'm fairly certain no one can resist the pull of the digger.

As always we love having people up to stay especially when they're so keen to help us with odd jobs- and especially when no one complains that the odd jobs are mostly heavy lifting and building work!

A few weeks later after the fairly consistent rain of July with the promise of a sunny weekend we had some more reinforcements; Jake's brother and my cousin to lay the last of the step/path. 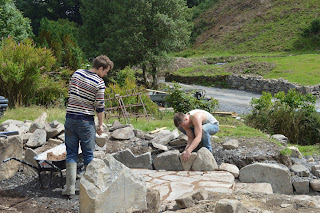 Dad found two impressive looking boulders whilst digging about around the back of the house which became the new pillars at the top of the steps, an addition we hadn't planned on including but decided that we couldn't resist. Everyone loves a boulder, these are nice boulders. 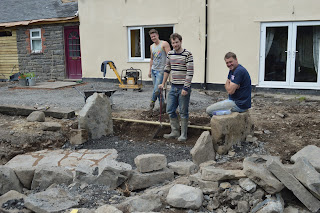 While I had the man power we took advantage of the sunshine to clear the front of the house, laying down stone and putting some old patio slabs by the front door so that it stays drier and less mucky with everyone walking in and out. By the end of the weekend we had a pretty smart looking entrance way to the house and a clean spot for Mam to sit with a beer! 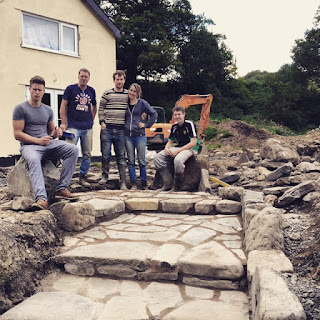 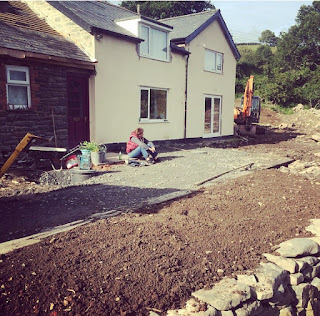