The First Painting of '15

The bath has arrived!
Of course we're not ready to plumb it in yet so it's making do in our living room.
It's quite a spectacular piece of craftsmanship and I can't wait to see it in position.

The windows and doors have gone into both the units, the stable is slightly ahead and has plastered while the chapel needs the underfloor heating laid before the floorboards and plasterboard can go in.

The stable feels like such a warm and cosy space now that it's all sealed and plaster boarded, it's a far cry from the draughty, dark workshop space it was this time last year.

With the plaster all up the glass bricks were the next job with painting to follow.
There was some pressure in getting the glass bricks right and not breaking any as I only ordered the exact amount! Clearly a two man job to get started.
They're fixed with a mortar mix much like building any brick wall except rather than pointing them up they get sealed and grouted so that it's water tight like a shower wall.
They were put in over two days so as the bottom rows had a chance to harden off before the top rows were put into place. 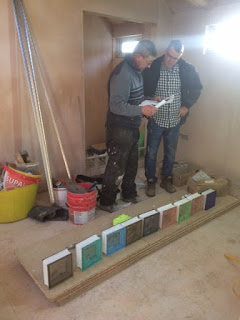 We ordered only a few coloured blocks to break up the clear, so we needed a little bit of a plan in where to place each separate colour- the last thing we wanted was the colour bricks bunched up in one corner. 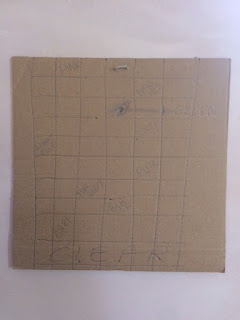 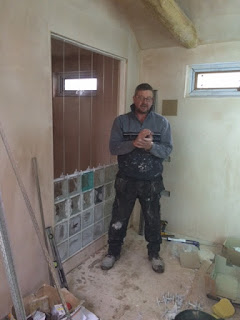 With the glass bricks in it was time for the great masking taping of '15 ready for the first coat of paint. As it happened Storm Barney was whistling it's way overhead so we had plenty of volunteers for painting inside the warm, dry stable! 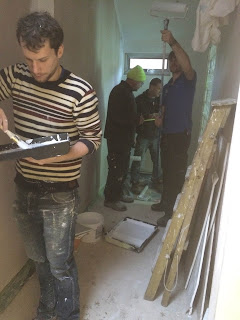 Ioan found his calling as official radio aerial for the event while Jake stayed dedicated until the early hours of the morning so the base coat was completed in one day. 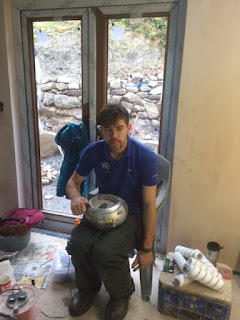 With the first coat of paint on the walls the next step is flooring.
Usually the flooring is laid towards the windows so as to take advantage of the light coming in, but whenever I've imagined how the flooring should look I've always seen it running along the room rather than across it. Tester photos and a small survey were obviously conducted in order to reach a fair decision. 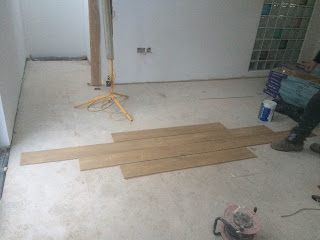 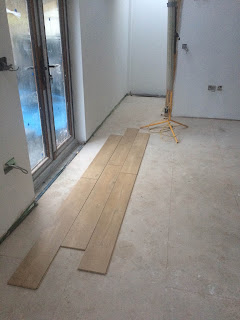