I've taken a booking for Y Capel so it's time to get a wriggle on, ideally we wanted to be finished within two weeks of Y Stabl opening, something we thought would be feasible but things don't seem to go to plan around here- and the less said about that the better! Needless to say we all feel quite frustrated.
Our first booking is for the end of May, so we've kicked it up a gear to get the inside finished and the garden looking presentable.
Again Jake's family were drafted in for garden work, bringing a fresh eye to the site which was a great help, as we've all been staring at the same mound of gravel for the last two months with no inspiration and a long list of other things to be getting on with.

This time with a larger space to work on we've gone for more of a courtyard feel rather than the blooming cottage garden next door in Y Stabl.
I loved the thyme and scented plants Steve potted in the gravel next to the stepping stones, so we did the same again leading from the door of Y Capel to the hot tub.
As this is a larger space there is more scope for Steve to stretch his imagination, and once I'd managed to veer him away from the idea of masses of bamboo we were on track with an unusual looking "Alice in Wonderland" style layout, with balls of box planted in the ground, tree trunk planters and lots of climbers dotted around the place. 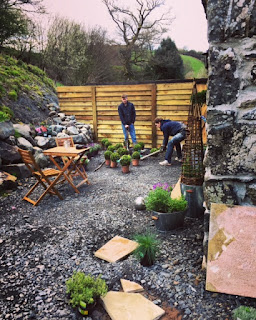 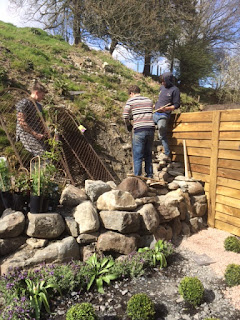 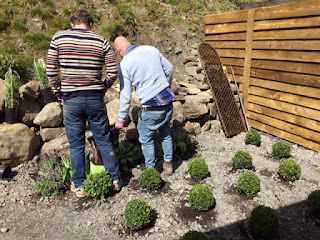 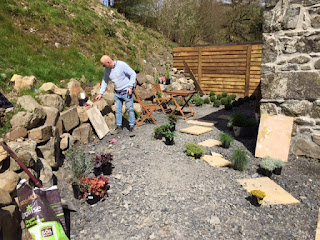 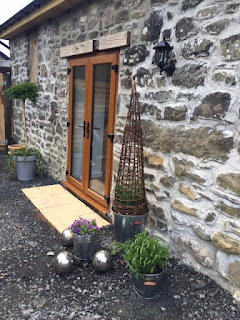 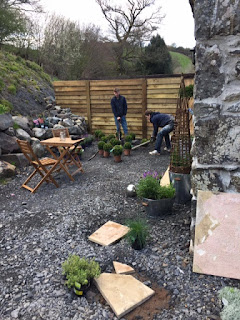 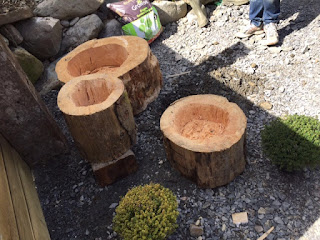 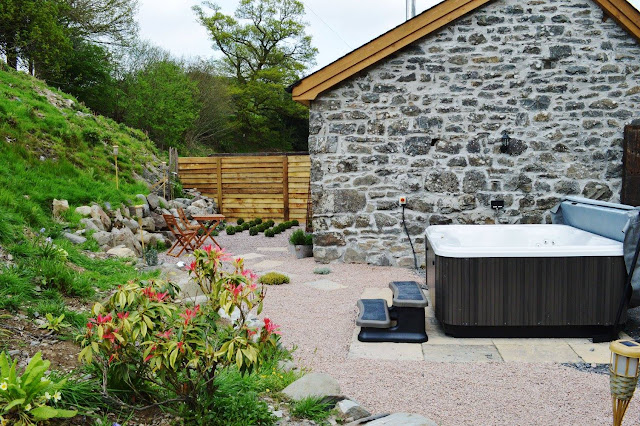 Around the front of the chapel there were a few external jobs that needed finishing off, pointing work mainly. Since moving here the chapel has always had quite a significant crack in one corner- it hasn't moved at all in the time we've been here but it wasn't something that beamed with confidence so while pointing up the walls we also put a large stone in the corner to bind it all together- this meant once more bringing up a tractor as back up! 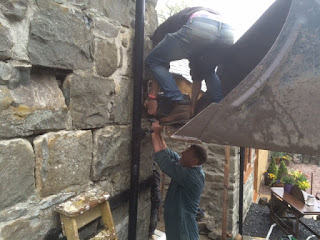 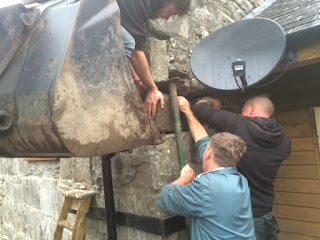 My groundsman (Dad) doing some strimming outside the chapel near the turning spot for cars. We've left two spaces where cars can drive up and unload before turning around and parking in the car park we made months ago. This way cars are safe and out of the way of any machinery or animals that pass through on the way to the fields, and also it keeps the aesthetic of what we've created. We're going from a rural, romantic retreat and the last thing someone wants to see when they look out of their window is someone else's car! So by keeping them hidden in the carpark we retain this remote and secluded feeling. 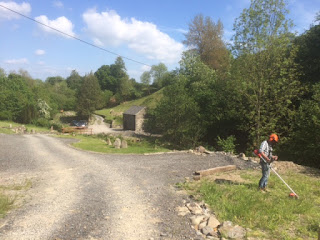 One of the list of things to finish was the step going into the chapel. Outside the front of the stable we have put some smart patio slabs as a welcome, but the chapel has more of a step between ground level and the door, and the building itself is all stone, retaining a lot of it's original qualities so we decided a stone step would probably fit much better. Plus, we've got a lot of stones and we need to use them up any chance we get.
Dad, being our main rock/stone whisperer picked out the stones he thought would best suit, and then they were very carefully cemented into place. 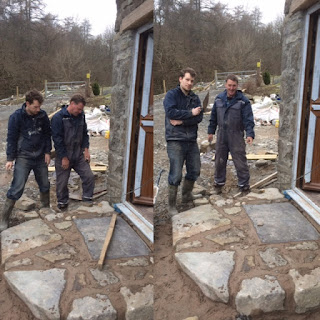 Inside the chapel there was plenty to be getting on with, tiling, laying the laminate down, the last of the plumbing and the electrics all needed finishing off. The main star of the show was the bath, how we were going to get it fitted and more importantly what we were going to do about taps.
We already had the antique brass taps Dad and I found when we went to order the hot tubs, but it was a case of deciding how we were going to fix them to the wall and how they were going to be plumbed in.
Dad suggested more oak- obviously! and I suggested a wavy, water like piece rather than just a square slab. So that was one problem solved.
As with most of this project once Dad's creative cogs started whirring he was off and so he announced that the pipes shouldn't come straight out of the wall and to the taps- that would be a waste of prime wall real estate! No, the pipe work should resemble a big heart on the wall, a copper heart to match the copper bath.
If looks could kill then our plumber definitely would have murdered Dad with a glance.

To be honest I think on the quiet Kevin loved turning the copper pipe into a heart shape because it's a particularly skillful piece of work and it receives a lot of admiration when people walk into the chapel.
It certainly fits with the aesthetic of the place and it finishes off our brass taps perfectly. 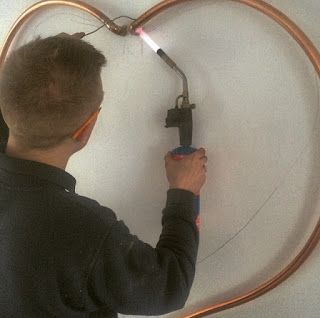 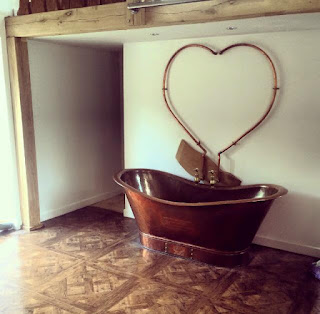 With the last of the building work going on, getting the furniture was next on the list, so of course Mam and I took another trip out to fill the car with cushions, throws and dishware! 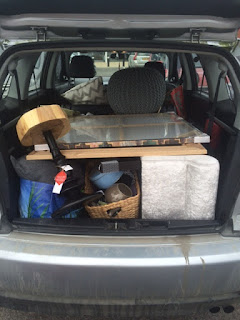 And we made sure to tick "lunchtime cocktail" off the list. 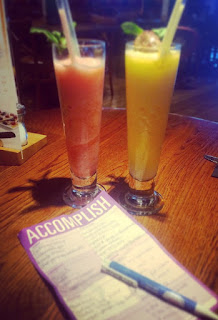 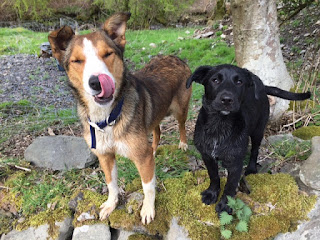