After a quiet month the builders have returned to start working on the chapel and they have set to making the very most of this lovely dry October we're having, I almost can't keep up!

The timber frame has gone in, as have the floorboards for the mezzanine floor.
We've retained the original beams in the centre of the building that make up quite a large central arch of what is now aged, kinda charmingly scruffy wood and we've added some extra oak beams to the downstairs, framing the position where I'm hoping the bath will sit quite comfortably.

The bath itself is due to arrive any time, and we're all ruddy excited about it, chaps!

Here we have Dad demonstrating where we think the toilet is going to go before the upstairs floorboards were fitted and a view of the wall that I think I might try and squeeze a TV onto if it'll fit.


The view down into the living room from the mezzanine floor and Dad and Joe demonstrating where we think the position of the bath will be when it arrives. 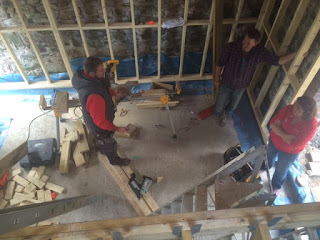 The oak beams that have gone in took a fair bit of drilling to say they least as they're a solid piece of wood, which is good for us but a little challenging for our builders! So challenging, in fact, that they needed a new, bigger drill bit! Here they are photographed admiring the new piece of kit! 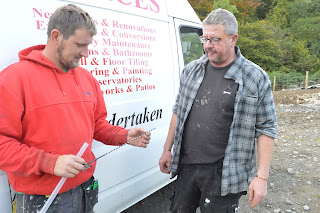 The stable has had it's fair share of attention too with the insulation starting to go in today, but more importantly the old beams that were taken out have gone back in!
They've been down at the farm for the last few months keeping dry and being worked on by literally anybody who has walked near them, if anything they've been a godsend with the wet weather that ground Dad's digging to a devastating halt, instead he's been able to sand away at the beams until his heart's content.
We've chopped, grinded, sanded before painting with woodworm deterrent so that the worst of the weathering that had started taking it's toll has gone and now they're like new, except still really old looking.
They have now returned to the stable where they have taken up new positions, three large ones are stretched over where the bed will be making what looks like an old fashioned "talent". A talent was a roughly put together upstairs floor in a barn above where the animals would have lived, almost like a mezzanine floor really, and it would have been used as a quick way to feed your cows or horses, the hay or straw would have been up on the talent where it could easily be thrown down into the mangers of the animals below.

At the moment they're quite a lot to take in when you walk into the stable as the timber frame is still exposed so with that and the beams there's an awful lot of wood on show, once the walls are plastered and painted however I think they'll sit quite comfortably in the room making the whole space quite a striking piece of building work.
Or at least that's what we hope.

Here we see the big operation of deciding where and how the beams were going to go back into the stable. We knew where we wanted the beams but it was deciding which beam was going to take up which position and how they were going to stay there. And even more vital a decision, which side of the beam has the nicest face to be on show 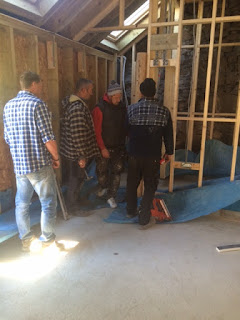 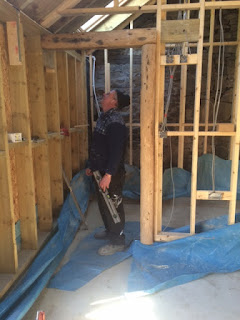 You'd think once the beams were in that would be the end of our great beam cleaning ordeal, but as with the job of digging Dad just can't help himself and once more the sander came out to add some smooth finishing touches to the wood. 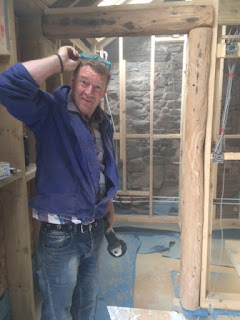 Again we seem to be providing the builders with more and more conundrums to solve, once the task of the beams was complete the next puzzle came along with the electrician. At the foot of two of the beams we've placed like pillars we fancied having some floor lights set in to light up the wood and provide a dimmer lighting setting should the guests want something a little more cosy. Of course they lights once ordered turned out to be much deeper than we anticipated and so longer than the depth of the floor. This meant more power tools! With Joe gouging out a slot for the light's casing to sit in the concrete floor. Talk about bespoke! 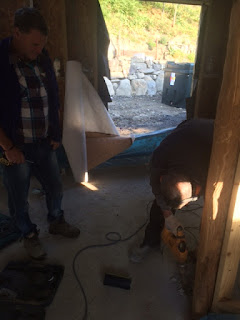 Power tools aren't always the reliable friends builders would have you believe, the plan was to quickly lop off the side of the stone in the background protruding from the wall but the stihl saw was not playing ball and decided to give up the ghost for the morning leaving the stone looking pretty relieved in the doorway. 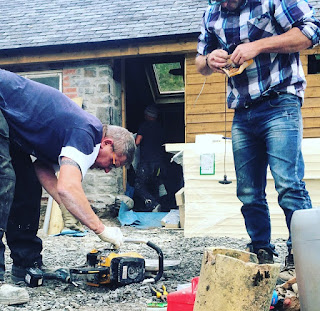 The windows and doors have been ordered and should be with us within the next week or so, I need to sharpen up and start thinking about interiors, at the minute my living room is full of catalogues and sample pieces of wood flooring where I try to get everyone to have a little walk on each tile to see which they like the best. Anyone who knows me will be well aware that I take a lifetime picking just a sandwich off a lunchtime menu so you can imagine the time it's taking me to decide on this sort of stuff!